Good news for those trying for the Railway Jobs. The Indian Railway (IR) recently announced RRB ALP & Technician Recruitment 2018 and RRB Group D Recruitment 2018 to fill 26502 and 62907 vacancies, simultaneously. The Railway Recruitment Board released detailed notification for both the jobs but many candidates got disappointed because they were not eligible. However, the Board has made few changes under the age limit criteria and now, the possibility of getting railway job is now open for more candidates.

The upper age limit for RRB ALP, as well as for Group D has been increased by 2 years. The extent is applicable for the candidates belong to General, SC, ST, and OBC-NCL category. The candidates can check the previous and updated age limit from the table below: 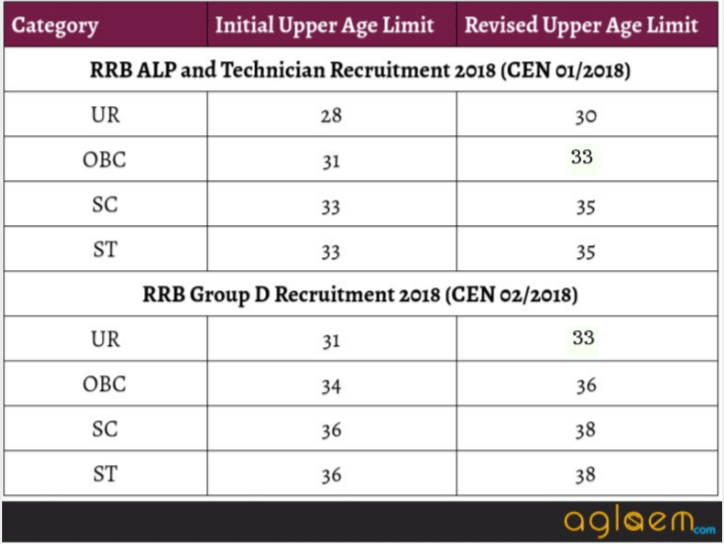 The RRB Group D application form, and for ALP, are available online. The amount of application fee is Rs. 500 but the candidates belong to C / ST / Ex-Serviceman / PWD / Female / Transgender / Minorities / Economically Backward Class category only need to pay Rs. 250.

The question paper of both the recruitment will be prepared in regional languages like Malayalam, Tamil, Kannada, Odiya, Telugu, Bangla and other languages. To become ALP or Technician, the candidates need to qualify CBT 1, followed by CBT 2 and Aptitude Test (only for ALP) and Document Verification. The selection for Group D posts will be done on the basis of CBT, followed by Physical Efficiency Test and Document verification.

The ALP and Group D recruitment combine is one of the biggest and most awaited recruitment so far. It is expected that IR will make it bigger by announcing RRB Assistant Station Master Recruitment 2018. Almost 50,000 vacancies will be announced under it.

RRB Assistant Station Master Recruitment 2018: Notification to be out soon

Indian Railway is the 4th largest in the world, after US, Russia, and China. It is also world’s 8th largest recruitment body, employed approximately 1.33 million staff in the year 2015-16. Lakhs of people apply for railway jobs, due to which the competition in the exam goes high. The candidates can crack the exam by studying as per the syllabus. Good luck to all the applicants. You may ask your queries by leaving a comment below. Or just use #askaglasem and tweet your doubt to us. We will respond asap.