RRB NTPC is one of the biggest recruitment by Indian Railway. After the release of the application status, it becomes clear who gets the admit card. Exam date, shift, and city is released 8 days before the exam, whereas, admit card is issued 4 days before it. 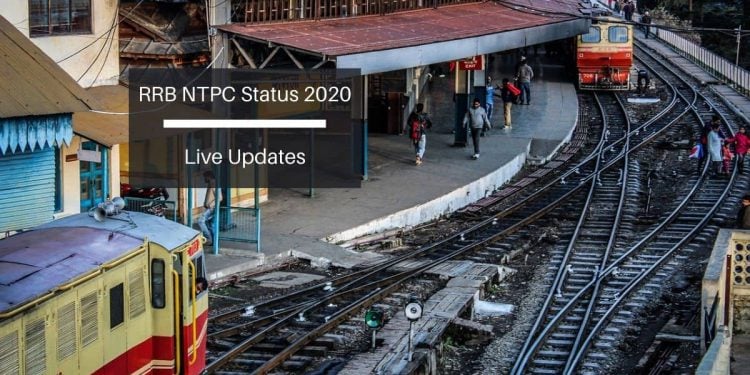 Railway Recruitment Board (RRB) has released RRB NTPC application status 2020 today. This is for railway CEN 01/2019 recruitment, application form for which were filled last year, in the month of April. RRB releases the NTPC status online, via sms, and e-mail. The sms and e-mail are sent at the registered mobile number and e-mail id. However, online it is available under the login, in the rgional website of 21 RRBs. Candidates only need registration number and date of birth (password) to check it.

Your RRB NTPC status will either be ‘Provisionally Eligible’ or ‘Rejected’.

The provisionally eligible status means that the form has been accepted and admit card will be issued to you.

Rejected status means your form has been rejected and no admit card will be issued to you. Reason for rejection will be mentioned there.

RRB started this recruitment last year, for 35208 Non Technical Popular Categories (NTPC) vacancies. Indian Railway was supposed to conduct RRB NTPC CBT 1 in the month of June / July. However, due to non finalization of conducting agency and COVID pandemic the process got delayed. Now, the RRB has revived the recruitment process again. The application status of RRB NTPC 2019-2020 was long awaited. Hence, we are running live updates for those 1,26,30,885 applicants who are eager to check it.

RRB has released NTPC application status. Check it from here.

None of the Railway Recruitment Board (RRB) has specified any time for the release of the RRB NTPC status 2020. However, it is expected that the status will be out either in the noon or the evening. It has been noticed that RRB either releases application status around 12.00 noon or between 6.00 to 8.00 pm.

RRB NTPC Status Out On These Websites

The status of RRB NTPC 2020 is released on the regional websites. In all, there are 21 RRBs and each other has its own official website. These are:

As per newspaper reports, around 3942 application form has been rejected by RRB Allahabad. The news reports also inform that around 18 lakh candidates applied under Railway Recruitment Board of Allahabad. The RRB critically scrutinize all the applications and on the basis of various reasons, reject more than 3000 applications.

The details of the rejected candidates has not been announced yet. However, candidates will get to know their RRB NTPC status 2020 soon.

In the previous railway recruitment, RRB have given candidates to correct the errors to turn rejected status into a positive status. However, this time, RRB has clearly mentioned that this is not possible and RRB will not entertain any request for the same. The official notice by RRB says:

“While every care has been taken in preparing the list of provisionally eligible candidates, RRB reserves the right to rectify any inadvertent error or typographical / printing mistake. RRB regrets inability to entertain any correspondence from ineligible candidates.”

Indian Railway has informed that the CBT 1 for RRB NTPC 2020 will be held in the month of December 2020. The tentative dates are as follows:

RRB NTPC CBT 1 is a 90 minute examination. Within this duration, candidates need to solve 120 questions on maths, general awareness, and general intelligence and reasoning. All of these questions are of multiple choice type and only one answer option is correct. From maths and general intelligence 35 questions each are asked. However, from general awareness, candidates have to answer 509 questions.

The syllabus of the examination has also be defines by the Indian railway. In each subject, the questions are asked from