RRB ALP Vacancy Increase is hereby notified. As per the official notice released by Railway Recruitment Board (RRB), the Assistant Loco Pilot (ALP) vacancies are to be increased from 26,502 to 60,000. A great news for the ALP post seekers in Indian Railways, almost 33,498 more opportunities are opening up.

The details of the new post wise vacancy change will be soon available on the website of RRBs. Candidates have to keep an eye on the website for the RRB ALP Vacancy Increase.

The candidates whose application status is now clear will be able to download the RRB ALP Recruitment 2018 Admit Card and appear in the first stage CBT. For practice, the mock tests are available on the official website. 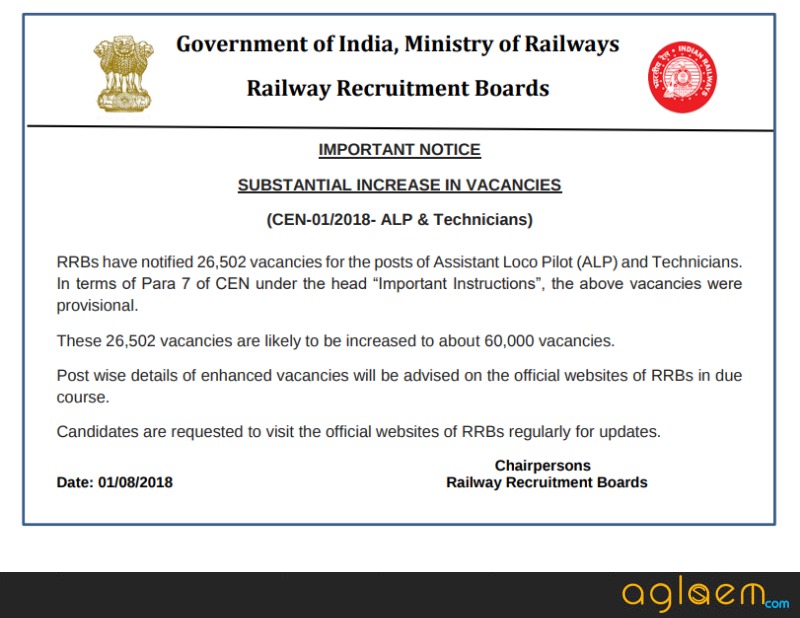 The first stage of the RRB ALP Recruitment 2018 is the screening exam. Candidates who will obtain the minimum cutoff marks in this exam will go for the second stage of the exam.

The second stage CBT will have two parts: Part A and Part B. Duration for Part A is 90 minutes and for Part B is 60 minutes. Part A will have 100 questions and Part B will have 75 Questions. There will be negative marking, 1/3rd of the total marks will be deducted for every wrong answer.

The selection process of RRB ALP 2018 involves qualifying 3 stages. On clearing all the 3 stages that are – first stage CBT, second stage CBT and the CBAT, candidates will be called for the document verification. On verification, the recruitment will be finalised. The pay scale at the initial level for ALP and Technicians will be Rs. 19,900/- along with that candidates will get DA, TA, and HRA.

MNS 2022 Notification Out, Apply Online from 11 May at joinindianarmy.nic.in