Railway Recruitment Board (RRB) has released RRB ALP Admit Card 2018 for the exam that will be held on August 21, 2018. As announced by the board, the admit cards have been uploaded on the candidate login, 4 days prior the examination. The candidates whose Loco Pilot and Technician stage 1 CBT is due to be held on August 21, 2018, can now download the hall ticket and check details in it.

The candidates just need to access the official website for the respective RRB and then seek the link for RRB ALP / Technician Recruitment 2018 (CEN 01/2018) admit card. It will lead to the login, which will look as shown below. To access the login, candidates need to enter user id, password, and click on the ‘Login’ button. 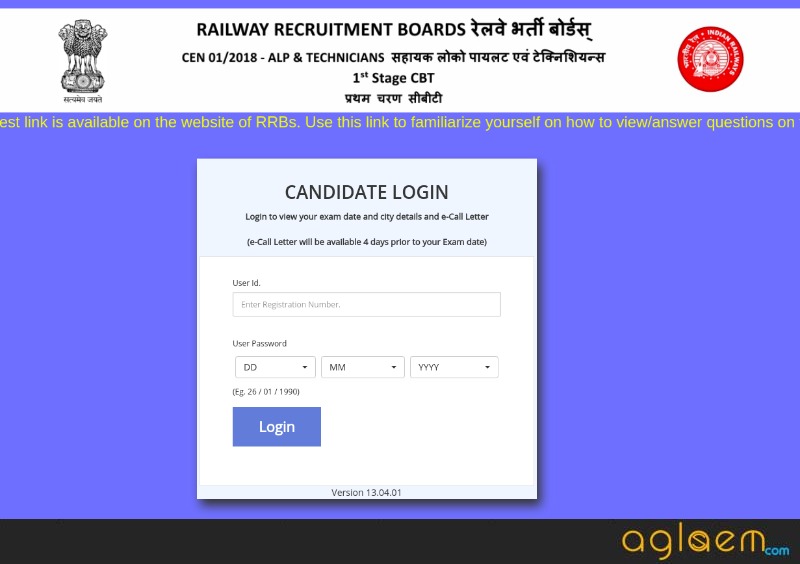 It is important for the candidates to download the Railway Admit Card 2018 and get a print out of it. On the exam day, the candidates will only be allowed to enter the exam hall if they will be able to show a print copy of the admit card.

Other than the RRB ALP admit card for August 21 exam, the candidates will also have to carry one photo id proof and a photograph. A valid id proof can be aadhar card, voter id card, passport, college id card, employee id card, pan card, etc. The photograph to be carried should be exactly the same as uploaded in the application form and must be of size 35 mm x 45 mm. Make sure that the photograph is a coloured one.

Candidates who opted for scribe, and are eligible, can also download the RRB ALP e-call letter for the scribe. At the exam hall, invigilator will ask for the scribe call letter as well. Hence, it is important that candidates do download and carry it as well.

The ALP admit card should be carried in good condition. In the admit card, there will be a section for ‘Self Deceleration’. There candidates need to write self deceleration, put left thumb impression, and write the signature. However, candidates need to do all of this in front of the invigilator. So, do not fill this area before reaching the exam hall.

All the best to all the candidate who will be appearing for RRB ALP / Technician CBT 2018. Carry all the important documents and do well in the exam. If there is any query troubling you, then let us know. Comment below!.