As per the reports that came up earlier, it was said that NTA has revised the tentative schedule of JEE Main 2019 and other exams that it will be conducting form 2019. However, the National Testing Agency (NTA) has officially locked the dates of all the exams including JEE Main 2019 on their website, nta.ac.in in the form of a Press release today. 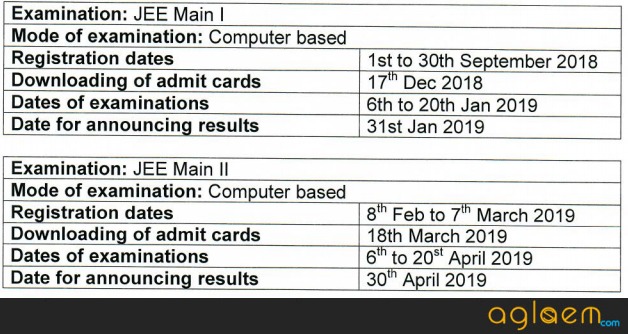 For the first exam, the registrations will start on September 01, 2018 and aspirants will have a window of 30 days to complete the registrations and submission of JEE Main 2019 Application Form, the last date thus being September 30, 2018. For JEE Main 2019 January examination the admit card will be made available on December 17, 2018. The result of the first exam will be declared on January 31, 2019.

The most important thing to note here is that the JEE Main 2019 Result for both the exams will be declared within 11 days of the conduction of the examination. As the exam will be in CBT mode only, the declaration of result will be early. 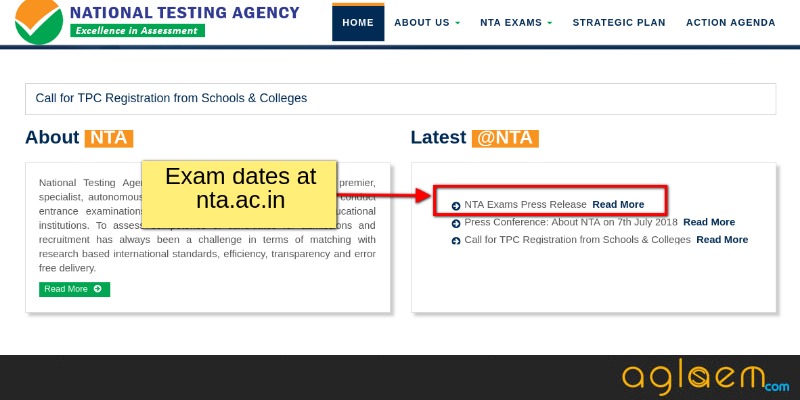 The tentative schedule of JEE Main 2019 which was released at the MHRD’s press conference on July 07, 2018, the admit card and result declaration dates were not announced. However, as per the new and final schedule by NTA, these dates are now available and there is a one minute change. The tentative schedule said that the JEE Main 2019 (II) exam will be held between April 07 to 21, 2019, but as per the final and new schedule, this dates has been changed to April 06 to 20, 2019.

The major declaration which has been made via this press release is about NEET 2019 exam. Earlier when the tentative schedule was announced at the Ministry’s Press Conference, it was said that NEET 2019 will be conducted twice and in online mode only. However, on the request of Health Ministry of India, this decision has been taken back.

Apart from changes in dates, no other changes have been announced via this press release, The distribution of marks, eligibility, attempts, syllabus, and exam fees remain the same.

CBSE to Change Class 10 & 12 Exam Pattern from 2020; Board Plans to Announce Result Sooner

CBSE to Change Class 10 & 12 Exam Pattern from 2020; Board Plans to Announce Result Sooner