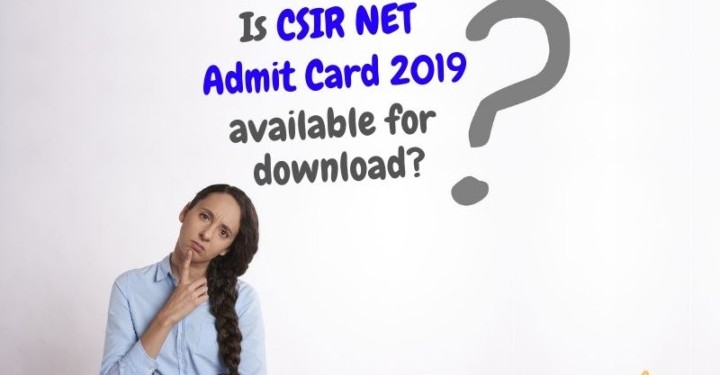 On one hand, candidates claim that they are able to download CSIR NET Admit Card 2019 for June exam from student login. On the other hand, CSIR claims that admit cards will be released today. There is evidence to support both claims.

The Joint CSIR UGC National Eligibility Test is scheduled to be held on June 16. And just two days ago, officials had confirmed that they will release its admit card by June 6, that is today. Also that they were trying to issue it sooner but due to Eid it may not be feasible on June 5.

However, since yesterday around afternoon time, reports poured in that candidates are able to download CSIR NET June 2019 admit cards from the same candidate login which was activated for checking registration status. Not only did the candidates claim it, but they also shared screenshots of their downloaded admit cards to prove it.

Once a few applicants of CSIR NET 2019 June exam established that it was indeed true, word spread over social media and from peer to peer. Soon several had downloaded their admit cards. However many, who would prefer to get the facts straight before obtaining their e-admission certificates, stated that they would wait it out until CSIR officially states on its website that admit card is out.

Today we contacted the officials of the exam conducting body to clarify the matter. According to the conversation, admit card will be released today. There is neither any confirmation nor any denial about the hall tickets which candidates have already downloaded from login.

In such a situation, candidates are recommended to do two things. First of all, they are free to login at the login link which is 217.182.197.22/JUNE_19_STATUS/StudentLogin.aspx. In order to do so, they have to enter form number and date of birth.

Then the second thing to do would be to check official website csirhrdg.res.in at regular intervals. As soon as officials put up notice that hall ticket has been released, they should login again and download it. At the end of the day, only that admit card which CSIR says is for Joint CSIR UGC NET June 2019 exam, will be valid.

Regarding how and why the document is downloadable even before notification for it was made available, there can be several theories. The most plausible one is that technically the hall tickets have been uploaded, and testing is ongoing. As soon as everything gets a green signal from all concerned, notification that candidates can now download it will be available.

With exactly as many number of days as you can count on your fingers to go, focus should be on last minute preparation. CSIR NET is a difficult exam solely from the point of view of the difficulty level of questions, and the awards at stake. Only select few will get the Junior Research Fellowship, and some more will get the eligibility for Lectureship.

CSIR NET June 2019 will be held in morning and afternoon sessions on June 16, 2019. Result for the exam will be announced in September or October.