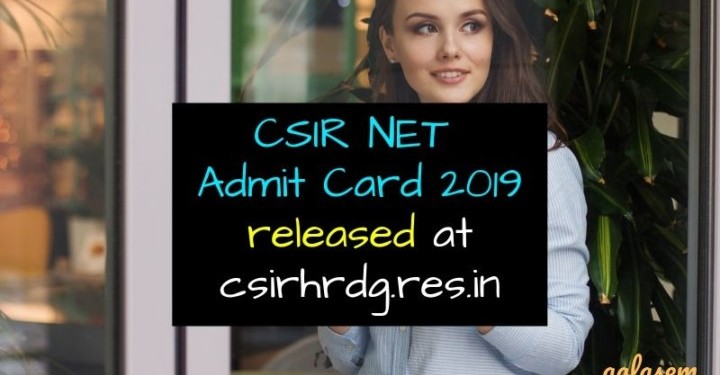 Council of Scientific & Industrial Research has released CSIR NET Admit Card 2019 today at csirhrdg.res.in. CSIR is conducting the Joint CSIR UGC NET 2019 on June 16, 2019. Candidates who had applied for the exam in Feb-March can now download hall tickets at candidate login.

The admit card for June exam has been provided at candidate login which was already available. The council has not activated any separate link for admit card download. In order to login, candidates have to enter form number and date of birth.

Candidates had been looking at csirhrdg.res.in regarding issuance of admit card. Although no notice was put up about it, when some candidates realized that they were able to download it from login (http://217.182.197.22/JUNE_19_STATUS/StudentLogin.aspx), they shared the news with peers on social media. That is how other CSIR NET applicants came to know about it.

The admit card can be downloaded from any device, computer, laptop, or mobile phone. However in the few hours following its release, the website is often crashing. Nevertheless the login page is working fine.

After downloading the PDF version, candidates have to print it on a plain white A4 size sheet. Preferably color printout should be taken as it is more clear. It is recommended to take multiple printouts, few as backups in case one is lost.

The CSIR NET admit card contains form number, roll number, medium of exam, subject name and code, exam timings, exam center, and instructions for exam. To appear in the National Eligibility Test for JRF and Lectureship for Science subjects, candidates have to go to the center mentioned in admit card only.

On the day exam, one has to carry printout of the e-admission certificate, and a valid photo ID. Documents such as voter ID, PAN card, driving license, aadhaar card, PSU or state govt issued ID, university or college issued ID constitute of valid photo IDs allowed for the exam. Items such as mobile phones, books, communication devices, electronic devices are strictly not allowed.

It is further instructed that answers have to be marked using black ball point pen. Authorities give question paper around 5 minutes before commencement of exam so that candidates can read all instructions.

Morning session will be from 9 AM to 12 Noon, in which, Life Sciences and Physical Sciences exams will be held. Afternoon session is then from 2 PM to 5 PM for papers Chemical Sciences, Mathematical Sciences, Earth Sciences.

After the exam, CSIR NET Answer Keys will also be available. They are officially released subject wise. Thereafter result will be announced at csirhrdg.res.in. Candidates are declared as qualified for Lectureship only or Junior Research Fellowship and LS as per marks obtained by them and their eligibility for the respective status.

Recently, University Grants Commission hiked the fellowship amounts for JRF, SRF fellows. The new stipends are Rs 31,000 and Rs 35,000 respectively. In India, Fellowships are awarded for Science through Joint CSIR-UGC NET, and for Social Science and Humanities through NTA UGC NET. Both exams are held twice a year.