BIS Exam Cancelled, More Than One Lakh Had Applied Notification of BIS exam cancellation was announced on Friday for the 1 Lakh candidates who had applied for the BIS online written test for recruitment of 109 posts of scientists. The examination has been cancelled two days before the examination. This action was taken by the consumer affairs ministry, after receiving a report from the chief vigilance officer (CVO). The report cited some alleged anomalies in the recruitment process. The examination was scheduled on April 15, 2018, Sunday. 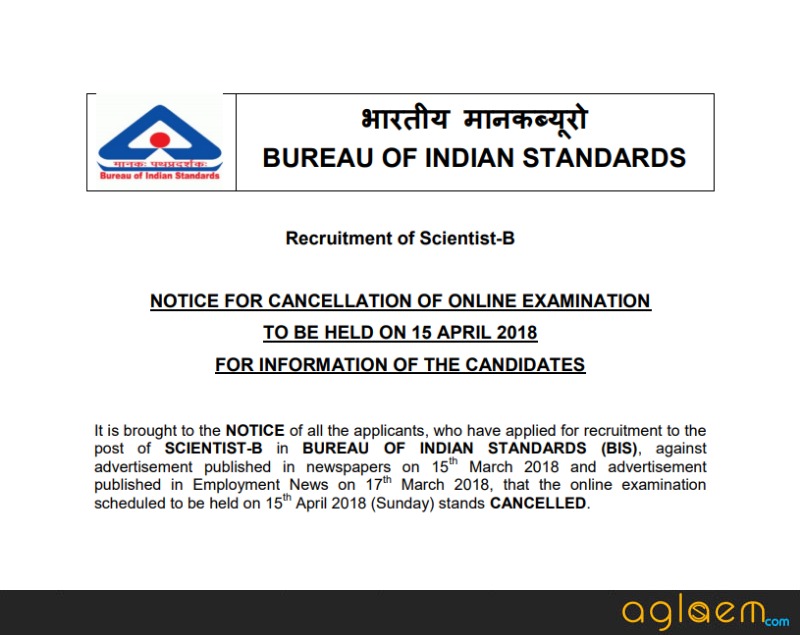 CVO also pointed out that Human Resource Department of BIS was unaware of any audit for security features for the examination software that the agency will use for conducting the BIS online test. Now, the BIS will set some new rules. Thus has asked for more time for the same. About one lakh applicants were scheduled to appear in the online test. BIS officials said they have no option but to cancel the test.

Also, the report disclosed there was 50-50 weightage for online test and group discussion/ interview. But this was not as per the proposed BIS regulations. According to BIS rules, only 20% weightage is given for the interview, a norm followed by UPSC and other central PSUs.

However, BIS officials contradicted it and confirmed that the weightage norm was as per the existing BIS Rules, “The process of notifying new rules will take another six months. Could we wait for this at a time when we have a shortage of manpower?” an official asked.

The sources also said that BIS was open to the reworking of the weightage mechanism to ensure only 15% mark is kept for the interview. But this did not satisfy the ministry. Hence, resulting in the cancellation of the online test.

BIS was supposed to organise the examination as per schedule and the selected candidates were supposed to appear for the interview rounds. But now about more than 1 lakh candidates are in still disbelief and figuring out what to do in this situation.

Candidates aspiring for government jobs who had applied are unhappy with the exam being cancelled so late. Since admit cards were also issued, many had booked train and flight tickets to reach their exam centres. On one hand candidates complained of exam being cancelled, and on another they were irked by cancellation notice coming just two days before exam.

Such short notice angers the candidates. Confusion and frustration prevail among many who had applied for the online test. Candidates are mostly annoyed because they feel that the information rolled out quite late. “They could have informed us earlier. We have booked the tickets and last minute cancellation gives us nothing.” , added another candidate.

The career of almost 1 Lakh candidates remains uncertain after the decision of the consumer affairs ministry. Students demand the answer to their questions. There are confusions regarding whether a reexamination will be conducted or it has been cancelled.  Also, refund of their examination fee is also is not clear.

Although it is hopeful, that BIS will come out with further notices regarding the above confusions and information regarding the recruitment process. Let us know your views about the decision of BIS? Did you expect such an impromptu notice?