Ananya Singh hails from Meerut city of Uttar Pradesh. She has done her schooling from Meerut Public Girls School Shastri Nagar, UP. After all the strenuous preparation for a year, she has proved that hard work always pays off. She has made her family and school proud by her achievement. Moreover, she is a source of motivation for the other students who will appear for the exam next year. With her this achievement, we wish she gets success in every step of her life.

She is from Arts streams and excelled in all the subjects to rank in top 10 positions of CBSE 12th Boards. In Political Science, History, Geography and Music, she has scored perfect 100. Whereas in the English language she has secured 97 out of marks making her total of 497 in the result. 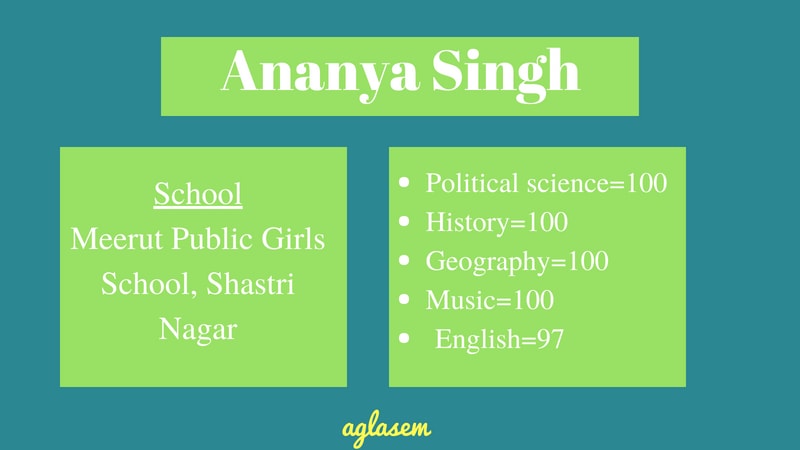 The first position in CBSE this year is achieved by Meghna Srivastava who has secured 499 marks in the exam. It is a proud movement for her school and for her native place. She is from Ghaziabad and has studied in Step by Step school in the same place. She got full marks in History, Geography, Psychology, Economics and 99 in English.

Even more, the differently abled students also passed with wonderful marks. Out of 2836 candidates appeared 2482 passed with passing percentage of 87.52%.

In case you haven’t checked or need to recheck the CBSE results. Then you can do the following via cbseresults.nic.in. You can also use google service, Microsoft Search engine, and Digilocker service to download the results. You can also avail SMS service to do the same.

Soon, the 10th CBSE Result will announce in the coming days. It is expected that result will release on May 28, 2018. Stay tuned with AglaSem for the latest news.

In the end, team Aglasem wishes you all the best for the future ahead.