The TS ICET exam was held on May 23-24, 2018. It took place in 56 centers in the Indian state of Telangana and four selected centers – Tirupati, Vijayawada, Kurnool, Visakhapatnam in Andhra Pradesh. This year over 61,439 candidates appeared for the test to take admission in two-year MBA programme.

Candidates after the release of answer key can also challenge it for any doubts and errors. Many times cases happen when an answer to a question is written wrong in the official answer key. In that case, you can challenge the answer key to the TS ICET 2018 Convenor. You can do the same until June 01, 2018. After that, all the raised objections will be properly scrutinized to release the final answer key on Jun 06, 2018. 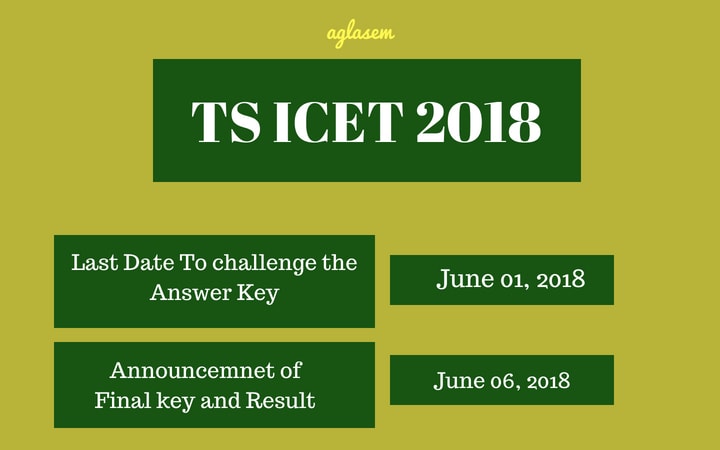 According to the schedule released by the University, the answer key was expected to release yesterday. That is exactly three days after the exam. Many students were waiting for it to announce but the university changed the schedule at the last minute. So, the answer key has now released on May 28, 2018, instead of May 27, 2018.

Moreover, the university has also reduced the time for raising an objection. Previously full 8 days were provided to candidates to challenge the answer key. Now, the candidates must do the same before June 01, 2018. So, only 4 days are now available to students to raise the doubt.

Following that, final result will release along with the revised answer key. The result will release in the form of a rank card. Further, candidates according to their rank will have to attend the counseling round to secure a seat in one of the colleges that came under TS ICET. It includes verification of original documents and submission of the fee to confirm the admission.

About TS ICET –  It is the integrated common entrance exam conducted to take admission in MCA/MBA two-year programme. The exam takes place in an online format with 200 questions in the paper. The test examines the aspirants on the basis of aptitude covering analytical, mathematical and communication ability. Moreover, every year the exam takes in the month of May for each new academic session. The registration form for the same releases in the month of March with a two month time window. After the TS ICET 2018, candidates have the option to appear for TS ICET 2019 to take admission in the academic year 2019-20.

An “Unprecedented” Move In The History Of Higher Education In India

An "Unprecedented" Move In The History Of Higher Education In India