RRB is holding RRB JE CBT 2 from August 28 to September 01. On the first day of the exam, reports of paper leak surfaced. Know the complete story here. 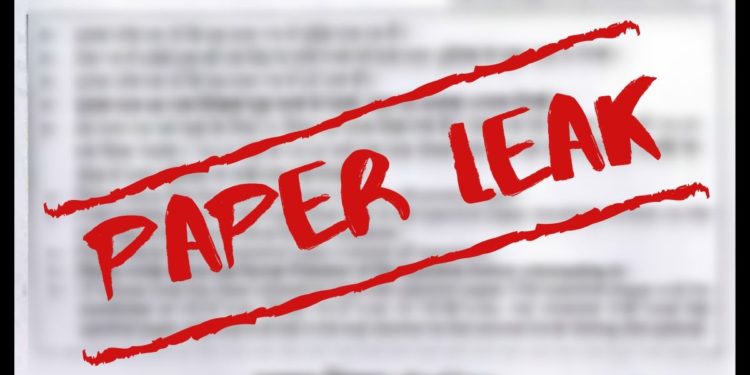 Reports of RRB JE CBT 2 paper leak has given rise to the hashtag “RRBJEScam” on social media. The story behind it is twofold – Firstly, candidates came across a PDF file containing 100 questions that claimed to be of the yet to happen test And secondly, pictures taken by a mobile phone camera of a computer screen showing different questions circulated allegedly straight from a RRB JE exam center.

Railway Recruitment Board has earmarked August 28 to September 1 as exam dates for the second stage of Junior Engineer recruitment, that was advertised vide CEN 03/2018. Amidst heated protests over the first stage results, the second stage took off yesterday. However even before the first shift could happen, candidates apparently came across a pdf file containing a hundred questions, which is the same number for the exam. The paper claimed to be the question set for Civil, one of the engineering branches for which the CBT 2 is being held.

A quick search on any of the popular social media platforms, for RRB JE CBT 2 PDF brings up the file in question. Candidates who appeared in the exam have claimed that all except few, some say one, some say two, questions in the said file have exact same questions. There are 100 questions in the pdf and answer for each question is also given, as the option number above the question number.

Now that the pdf file has gone viral, claims regarding how long before the exam it was first found is a bit hazy. Some candidates say it surfaced a few hours before exam, wheres a few have gone on to say that it was available weeks before the exam.

This being said about the viral pdf, that came into light before the exam, another story apparently happened during it.

RRB JE CBT 2 Paper Leak case number two is about a video from a center, and pictures of questions on a system.

Adding fuel to the fire, a video appeared out of the blue, again on the omnipresent social media, where candidates have shot a 44 second video on their mobile phone inside a center. The candidate is seen to be speaking in bengali, where he says, that roughly translates to, “candidates are doing as they please at the center”. In the video he has the mobile phone out in full view, he is standing (he, by the voice), and shooting the video that everyone can see. Mobile phones are technically not allowed inside the RRB JE exam center.

Perhaps from the same center, or another, a candidate has taken pictures from his/her mobile phone of the computer screen that shows different general awareness questions. A number of these images have made their way on social platforms. The images are suspected to be taken from a centre in Kolkata, where there was no invigilator. As per reports, an aspirant of RRB JE clicked the images of the questions and uploaded it online.

Where questions and answers in the pdf seem genuine and are from the respective subject, the images of general awareness questions raise doubts because answer options for few questions do not match.

Logically speaking, the chances of pictures being clicked and circulated from inside the centres seem slim because Railways does not allow candidates to carry mobile phones inside the exam hall. However, lack of proper invigilation could have lead to such a folly.

Most of the cases are reportedly from Kolkata, where it has also been just reported officially that due to technical and similar issues the exam was cancelled. Indian Railway is maintaining silence on the matter but if the examination was cancelled then it will soon release reschedule notice.

Reports of Railway recruitment paper leak are not new. After each paper of railway, such news makes to social media but the authenticity of these is difficult to evaluate. If the reports stand true then Indian Railway may re-conduct the exam. However, nothing can be said as of now.

Reports of Railway recruitment paper leak are not new. After each paper of railway, such news makes to social media but the authenticity of these is difficult to evaluate. If the reports stand true then Indian Railway may re-conduct the exam. However, nothing can be said as of now.

RRB Junior Engineer recruitment 2019 is open for 13487 vacancies. Stage 1 of JE was held from May 22 to June 02 and candidates who qualified it are now appearing for CBT 2, between August 28 to September 01, 2019. Those who will qualify this round will be called for document verification and medical test.