Log in with registration number and date of birth to check. 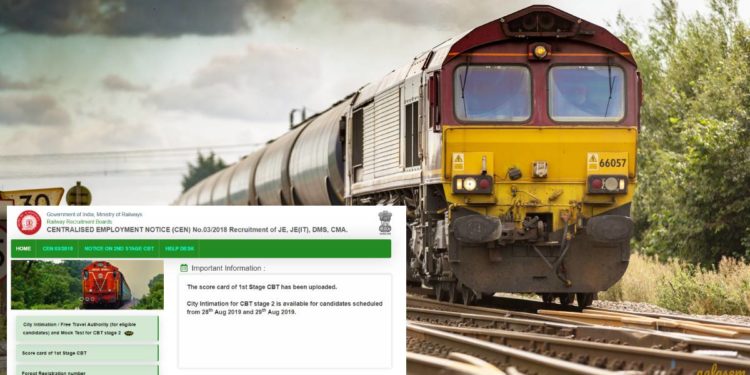 Railway Recruitment Boards have now released the exam date and city intimation for RRB JE CBT 2 for exams scheduled to be held on August 28 and 29. Those who will get exam date as August 30, will get their city intimation tomorrow at rrbonlinereg.in.

As per the notification released for RRB JE CBT 2 exam dates, it was stated that exam date and city intimation will happen on August 17 and a later notification informed that time for it to be 11 pm. Due to undisclosed reasons the announcement was delayed by a few hours and ultimately login link opened for the same on August 18, at around 1 am. However it was done only for candidates whose exam date was assigned as August 28. All other candidates can see “your exam city intimation will be available soon” after logging in. Now, a day later, the exam date and city announcement for August 29 exam date has also been done.

Candidates who are qualified for the Railway Recruitment Board Junior Engineer recruitment second stage computer based test, as per the result of CBT 1 that was announced less than a week ago, may note that if they see “your exam city intimation will be available soon” in their login for exam date and city, then they should not panic. It only means that their exam date is neither August 28 nor August 29. Their exam date can be any date between August 30 and September 1, both dates inclusive. They will soon get to know the same.

There is an ongoing protest against the RRB JE CBT 1 result. Candidates demand, through the protest, that the cut off percentage be lowered and be uniform for all. The reason behind their demand, as per the candidates, is that the first stage exam was largely non technical in nature and thus too many aspirants should not be disqualified on the basis of it. Railway Recruitment Board, Ministry of Railways, Govt of India is yet to comment on it. A total of 2,02,616 candidates have qualified for CBT 2, equal to fifteen times the total vacancy that is 13,487.

Insofar the RRB JE CBT 2 is scheduled to be held from Wednesday, August 28 to Sunday, September 1. Right now exam date and city intimation is being issued. Then from August 24 onwards, RRB JE CBT 2 admit card 2019 will be released in such a manner that candidates will be able to download them from exactly four days before the exam.

Since the exam city is already known, candidates can make travel arrangements even before getting hall ticket.

The CBT 2 will 150 questions of 150 marks. Sections in the exam will be general awareness, physics and chemistry, basics of computers and applications, basics of environment and pollution control, technical abilities. They will respectively have 15, 15, 10, 10, 100 questions respectively.

Each question in second computer based test will be of one (1) mark. And one-third (⅓) mark will be deducted for incorrect answer. There will be a virtual calculator in the exam as well.