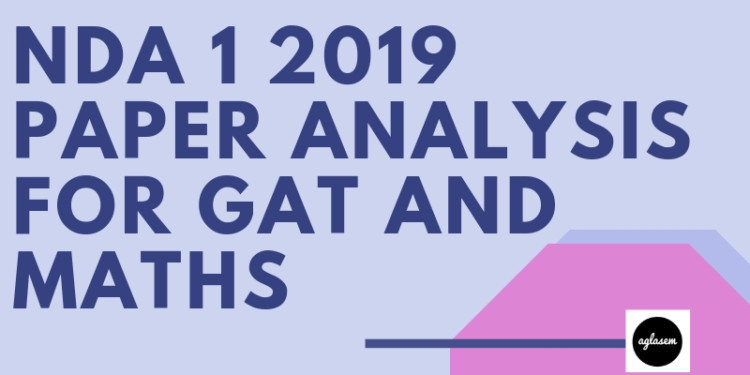 Union Public Services Commission (UPSC) conducted the general aptitude test (GAT) and Maths exam for NDA 2019. Paper 1 and 2 exam got over at 12:30 pm and 4:30 pm respectively. Students appeared in the examination seemed satisfied in both the paper as the level of GAT and maths paper was moderate to easy.

In the NDA 2019 paper II question related to English, physics, chemistry, biology, history, geography, current events, etc topics were asked. The maximum questions were asked from G.K. Last year GAT paper was quite hard as a comparison to the current year. The English section questions were quite easy. In the English sections question of synonyms, antonyms, idioms, error finding were asked. As per the analysis, it has been found that this year it may be possible that the cut off marks of NDA 1 2019 go higher.

In the maths exam, maximum and minimum questions were asked from trigonometry, probability, and 3D respectively. Other than this, the questions from algebra, calculus, vector, matric determination topic, set, and series were also asked. Students who appeared for the exam were found the question related to trigonometry and calculus a bit challenging.

Now the unofficial NDA 1 answer key for GAT will be released within a few hours. From the answer, key candidates can estimate correct scores by following the marking scheme. In the general ability test (GAT) total, 150 questions of 600 marks were asked. For each correct answer, 4 marks will be awarded and for each incorrect answer, 4/3 marks will be deducted this means that there will be negative marking.

Union Public Service Commission (UPSC) will declare the NDA 2019 result at the official website i.e. upsc.gov.in. It is expected that the result will be declared in the month of June 2019. The candidates who will obtain the minimum qualifying marks in the written examination those will be shortlisted for the final round i.e. service selection board (SSB) interview. The SSB round consists of two stages. Stage 1 and Stage 2 round duration will be of 1 day and 4 days. The candidates who will qualify the stage 1 those selected for stage 2. The qualifier of the service selection board will be called for the detailed medical test. After the condiction of the medical test final result will be declared.