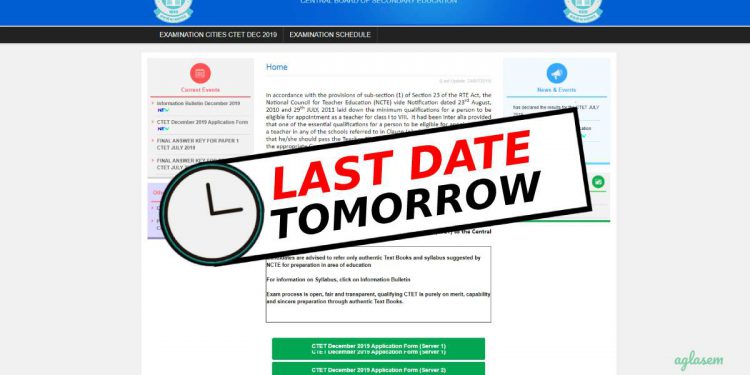 Central Board of Secondary Education (CBSE) has now provided two application form links for Central Teacher Eligibility Test (CTET) 2019. The official website ctet.nic.in now has two buttons for the CTET December 2019 application form, marked as server 1 and server 2. This step has most likely been taken because candidates were facing issues on the website earlier.

The link marked as server 1 leads to online form hosted at ecounselling.nic.in. Whereas the server 2 link opens form at ctet.nic.in. There is no difference in the process of applying through both links. Candidates can apply from any one.

A month’s time has been given to fill and submit the application form of the national level teachers eligibility test. Still, maximum rush of applicants has been observed in the final week before last date. Either due to the heavy traffic or for other technical issues, candidates had been complaining in the past few days that the CTET website was not working and have been contacting the CTET helpline.

CBSE has provided helpline numbers at ctet.nic.in under the contact us link. The tele helpline numbers are 011-22235774, 011-22240112. Candidates can also contact the officials via email at [email protected], [email protected] However now that two apply online links are available, and traffic will split between them, it is expected that the site not working issue will be resolved.

Final verification of fee payment by candidates will take place one week after the last date to apply online. And after that, form correction will be opened for one week, from September 27 to October 3. The board has made it clear that no corrections will be allowed after that date.

An important piece of information has been provided by CBSE – If a candidate has paid fees but still the confirmation page is not generated, then he or she can approach the Joint Secretary (CTET), CBSE with proof of fee payment. This can be done from September 27 to October 3, from 10 am to 5 pm on those dates.

CTET December 2019 is the second Central Teacher Eligibility Test of the year; the first one was in July. The CTET July exam was held in 114 cities and the result was announced in record time of only 23 days. As per reports, there were 4,355 observers, 827 CBSE officials overseeing the exam. 29.22 candidates applied, 23.77 lakh appeared. 2.15 lakh candidates qualified in paper 1, and 1.37 lakh qualified in paper 2. Marksheets of candidates were later uploaded at digilocker.

The paper 1 is for aspirants who wish to teach classes first to fifth. Whereas the paper 2 is for those who will become teachers of classes sixth to eighth.