UP Madhyamik Shiksha Board (Secondary Education Board) had to cancel class 10th science and class 12th Physics paper. The UPSEB took the decision after reports of the paper leak were confirmed. The class 10th Science paper was conducted on February 20 and has been leaked in Maharajganj, whereas, the Physics class 12th exams were held on February 15 and 16 and leaked in Chandauli district.

Neena Srivastava, the Secretary of UP Board told a prestigious daily that they are investigating the leak in both the districts. If the question was leaked on social media then the examination will be canceled throughout the UP but for now, it has only been canceled for the respective districts.

…for now, the re-examination will only be conducted for the candidates in these two districts. If the paper is cancelled for the entire state then all the candidates will have to sit for it again.

The class 10th paper leak incident came to light in Devlali Kanya Inter College, in Maharajganj. The paper got leaked in the district and the photocopies of it were sold flagrantly by a shopkeeper. District Inspector of School, Ashok Kumar, was on his wits to notice that the question paper bundle was signed by the Centre Manager but was not sealed. When questioned, the Center Manager brazenly told that he signed the bundle by mistake. No arrest has been made so far but the Center Manager, Raj Bahadur Singh, and two other invigilators are being suspected of the glitch. 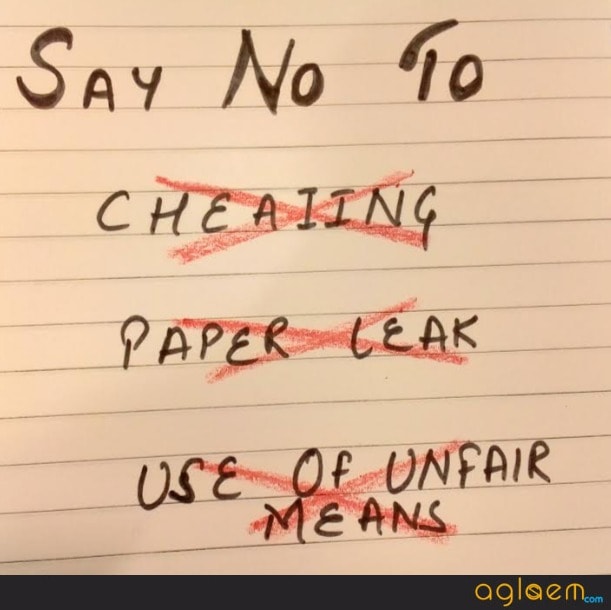 The principal of Inter College in Balua, Chandauli, has also been put the behind bars. On February 17, 2018, he along with 4 people was caught in his residence, solving physics papers. Police also recovered answer sheets, solved question papers, and cash of Rs. 15.50.

The entire gang has been arrested. The police have got the cash, 3 mobile phones, and handwritten copies of the question paper. Three of them have been booked under section IPC 420, 467, 468, and 471 for dishonest delivery of property, forgery of valuable, cheating, and using as genuine a forged document.

The nation applauds the effort of UP Madhyamik Shiksha Board against cheating and fair conduct of Board examinations. But what can be done when the teachers and school principal will give birth to such felonious activities. All the policies and norms will go down the drain when the people will be corrupt.

Unfortunately, it is not only the fault of the corrupt teachers and goons. The students are to be equally blamed.

If students will not buy the question paper then who will leak it? It is sad that because of few students who are not ready to work hard, all will have to suffer. The honest students who studied day and night will also have to sit for the exam again.

Now, some will argue that the students are already in pain and must not be blamed. However, you cannot clap with one hand. Since the Board got active against cheating the troll of dropouts in UP Board exams has increased to 10 lakh. On the day 1 of the exams, 1.8 lakh candidates did not turn up for the exam and on day 2, the figure raised to 5 lakh. If the students would have studied and not relied on unfair mediums, they would not have been afraid to take the exam.

We, as citizen of India, need to understand that blaming the system is not the solution. Thse students can actually help eradicate the problem of the paper leak by standing against it. What are your views on the matter? Do you think the measures taken by the Board were enough to curb cheating and paper leak? Can students fight against the paper leak and should they? Speak up your mind, share your thoughts with us, comment below.

RRB Group D Recruitment: All the Changes You Need to Know

RRB Group D Recruitment: All the Changes You Need to Know