Hope for improvement in Bihar school education is dying with every passing year. While the nation is still struggling to digest the fake topper news of a year ago, reports of question paper leak have started surfacing for 2018 Bihar board 12th exams.

The Bihar School Education Board, BSEB, started class 12th board exam as per Bihar board 10th exam dates 2018, with Biology and Entrepreneurship paper, on February 06, 2018, and in no time the reports of question paper leak were all over the web.

Tejashwi Yadav, Ex. Deputy Chief Minister of Opposition Leader, confirmed the news in via Twitter. In his tweet, he revealed that the state government knew about the leak but still went ahead to conduct the exam. 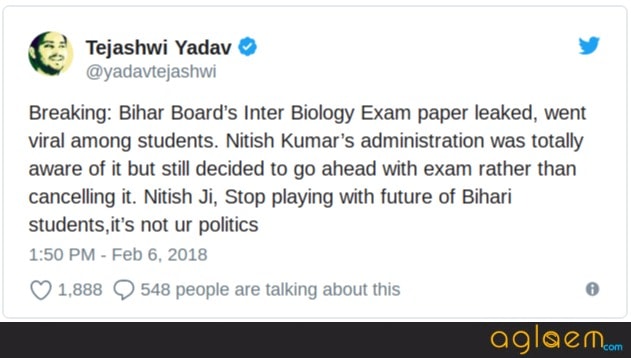 On the other hand, Mr. Krishnandan Prasad Verma, the Education Minister, made no statement if the paper leak was already known or not but did assure that the department will look into the matter and will take appropriate actions to resolve the matter.

Bihar Board is one of the biggest state board in India. Almost 12 lakh students appear for the exam, in around 1384 centers. The leak of question paper was reported in Nawada and Supaul centre, in the second sitting. Bihar Board 12th result 2018 will be announced in May 2018.

Around 12 lakh students appeared for the examination on the first day at 1,384 centres across the state. While the opposition took the opportunity to use the paper leak for slamming Nitish Kumar administration but as per education minister, the examination was conducted under strict security and went cheating free. He even said that the people tried to make mountains out of a molehill just to disgrace the board.

The conflicting statements have left the students baffled. Such news was the last thing they needed at such such stressful time. The general notion of the Bihar education is that it is low graded but there are students who study hard day and night in order to get good marks, college, and a better life. Some of them burn the lamps day and night, while some might also be the sole earning member of their family.

These students deserve better. The political parties blamed, hide, lied, disdained one another but none will take the actual step to reform the education. What do you think is the right solution to improve the education system in the state? Speak up your mind and let us know in the comment section below.