As per reports, the National Recruitment Agency is set to replace functions of Staff Selection Board, Railway Recruitment Board and Institute of Banking Personnel Selection 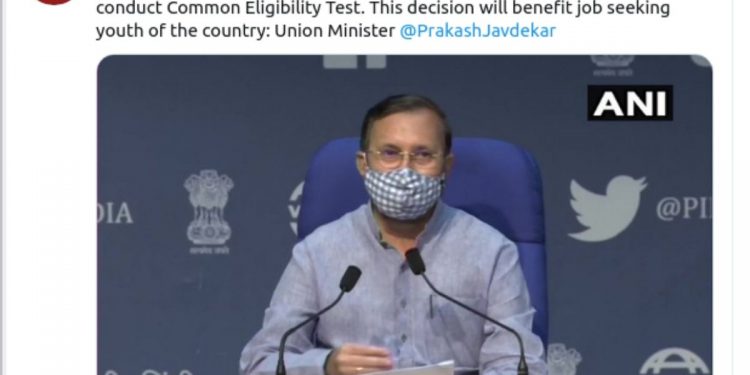 A proposal to set up the National Recruitment Agency has been approved by the Union Cabinet today. As per reports, the National Recruitment Agency is deemed to replace the Staff Selection Board, Railway Recruitment Board and Institute of Banking Personnel Selection (IBPS). Union Minister Prakash Javdekar publicly announced that the NRA has been approved to conduct the Common Eligibility Test. Reportedly, this test will serve as the selection test to fill up various Group B & C level vacancies in Central Government departments and public sector banks. The Cabinet headed by PM Narendra Modi has approved the proposal for the establishment of the NRA.

Prime Minister Narendra Modi tweeted that the NRA will be a blessing for crores of young Indians. It will also make the government recruitment process more transparent.

There are various central government recruitment agencies but as of now, the Cabinet has approved the establishment of the NRA to jointly serve the recruitment functions of the Staff Selection Commission, Railway Recruitment Board and Institute of Banking Personnel Selection. Candidates looking to apply for various Group B & C level government jobs have to now take the CET exam and qualify in it. As per Minister Javdekar, the decision of the establishment of the NRA is to serve the benefit of many unemployed youth of the country.

An entrance exam will be conducted by the NRA which will be computer-based. Recruitment to fill up vacancies in public sector banks and central government departments in various non-gazetted Group B & C level posts will be done through the CET exam. There are no limitations on the number of attempts at CET and the score of the CET exam will remain valid for a period of 03 years. Based on the score of CET, candidates will be able to apply for recruitment to various Central Government departments and agencies run by such departments.

As Union Minister Jitendra Singh, the centralization of the functions of SSC, RRB and IBPS through the establishment of the NRA will streamline the government recruitment process to fill up Group B & C posts. The centralization of the services will bring ease to the recruitment, selection and candidates, said the Minister. The concept of the National Recruitment Agency was proposed for the first time in the Union Budget 2020. Finance Minister Nirmala Sitharaman announced during the Union Budget that the NRA would be established as an autonomous specialist organization to conduct the Common Eligibility Test for preliminary selection of eligible candidates to apply for various Group B & C government recruitments.

The decision to establish the NRA is indeed an innovative reform to optimize the entire economic scenario after India witnessed unemployment as an aftermath of the COVID-19 pandemic. In such situations, the NRA will not only help to create more job opportunities but also ensure the streamlining of government recruitment costs at the same time.