Prakash Javadekar, Union Ministry MHRD, took to Twitter to inform the decision. He explained that though the universities will have the freedom to make the decisions but will remain under the preview of UGC. 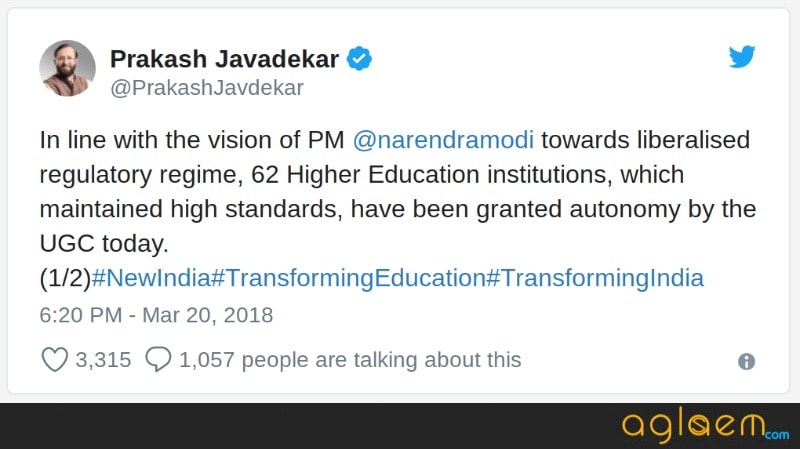 The list of Higher Educational Institutions which have been granted autonomy by UGC is as below:

CATEGORIZATION OF UNIVERSITIES AS PER UGC REGULATIONS ON GRADED AUTONOMY

UNIVERSITIES FOR GRANT OF GRADED AUTONOMY

INSTITUTIONS DEEMED TO BE UNIVERSITIES (Category I)

The 10 lucky private colleges that have been given the autonomy are Pandit Deendayal Petroleum University, OP Jindal Global University, among others.

The minister also explained that these universities will have the freedom to sign academic collaborations with world’s top universities. These Universities even have the authority to pay the faculty beyond recommends of the Seventh Pay Commission. This can be the major change which will allow universities to recruit the best teachers. However, the university will have to certify the degree they will be awarded to the students. The colleges now holds quite a lot of authority but do not possess degree awarding power.

The organization claims that the freedom is, in fact, a trap for self-destruction because the currently running courses will be decimated. It also believes that this decision will impact Schedule Case, Schedule Tribe, and Other Backward Classes communities adversely. Even the teachers currently working might be impacted.

What do you think is just? Is UGC right in granting full autonomy to the institutes or will it lead to degrading of the existing courses and exploitation of the students and faculty? Let us know in the comment section below.