Home » Competitive Exams » “Video circulating on social media about an examination in Bhagalpur centre of Bihar does not pertain to RRB Group D Exam”, clarifies RRB

“Video circulating on social media about an examination in Bhagalpur centre of Bihar does not pertain to RRB Group D Exam”, clarifies RRB The Railway Recruitment Board (RRB) Jammu has clarified on their official website regarding the rumors circulating about an examination in Bhagalpur center of Bihar does not pertain to RRB Group D Exam. There were many Youtube videos spreading such a rumor which confused the candidates.

The Board has also stated that the candidates should not get misguided by any such misinformation on social media and rely only on the information published on the official websites of RRBs. 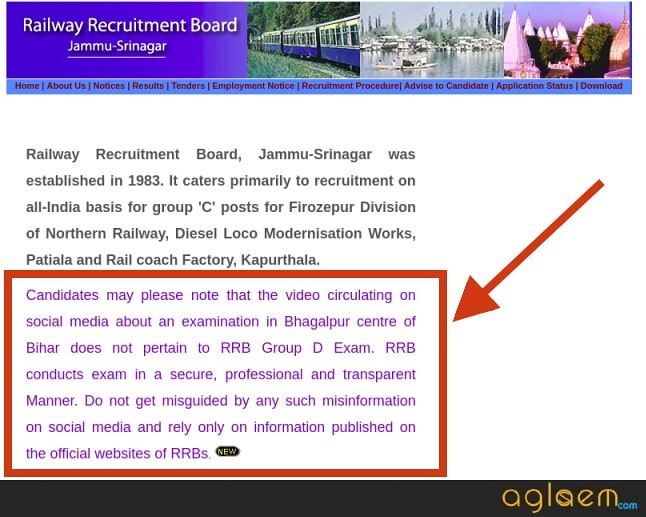 One video was circulating in the social media in which it was shown that the candidates who are taking the exam were roaming freely during the exam. There was no staff inside the test center to look out for the discipline. In the video, it could clearly be heard that the students were appearing for the different exam and not for RRB Group D.

The candidates were roaming in between the exam with their mobile phones. They also reported that the staff was not present during the exam and there was no management also. No Biometric verification of the candidates was done at the exam center which is generally done by the exam invigilator.

However, the RRB has clarified that the video circulating on the social media is not of Group D Exam and the students should not pay any heed to such rumors. The RRB conducts exam in a secure, professional and transparent Manner.

The RRB has the started the computer-based test from September 17 till December 14, 2018. The Board has also published the schedule for downloading the admit card as per their exam date.

Another news which doing the round is that the RRB has postponed the exam scheduled to be held on September 25, 2018, at Bhopal has been postponed due to the Prime Minister rally in Bhopal. However, this has not yet been confirmed by the official authorities.

LPU To Start B.Tech Admission Process From October 1st Week; Candidates Have To Apply For LPUNEST 2019 For Admission