Role Of Coaching Centres In Cracking JEE; Guidance Or Obsession? Coachings in India and any major national level entrance exam are married to each other since long back. As per the reports, the reason behind splurge of Coaching Centres is due to uncertainty in school education. This is not another article where we will talk about the boon and bane of the coaching centers. But we will go fact by fact on what role (good/bad) have the coaching centers played till date in JEE preparation.

The most popular entrance exam in India is the Joint Entrance Examination (JEE) by the Indian Institute of Technology (IIT). To take admission in the IITs, candidates have to go through a 2 stage screening process. First, clear the JEE Main and then cut through the JEE Advanced. Both the exams are no cakewalk and require extravagant preparation and dedication. This ensures that only the best out of the best lot get into the top-notch institutes of the Nation.

Many call the coaching industries the “Indian Coaching factory”. A study by ASSOCHAM reveals that 70% of the parents from the uppermost to the bottom stratum of the society prefer spending hefty amounts in the coaching centers. This is not merely joining the crowd, but this is due to some result that majority see and are attracted to join the Coaching Centers.

Another Government study shows that every year more than 50% students who get into the IITs after clearing JEE Main and JEE Advanced rely on self-study and not on coaching centers. However, this trend has seen a change since 2018, when the percentage of students taking admission in the IITs dropped to 43% who depended on self-study.

Coaching Centres are said to be contributing significantly to admissions in the IITs each year. In 2017, Rajasthan, which is known for its IIT coaching centers, has contributed 1,711 admissions.

It Is All About The Perspective!

For instance recently, in JEE Main 2019 January Attempt, Navneet Jindal from Haryana has scored a 99.99 percentile and had relied completely on self study.

Here is a report that Committee of Eminent Persons (CEP) Constituted by the IIT council had given: 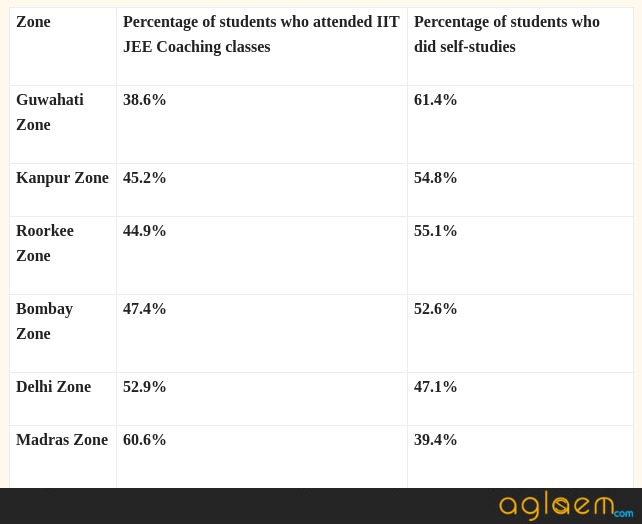 The dedication that one puts in achieving the goal and the fire inside that keeps burning is what pushes to crack JEE. Coaching or no Coaching is a secondary factor.

But to address the elephant in the room, the contribution of the coaching centers in IIT admission is really significant. The dates above on this page proves this fact to be true.

Coaching Centres – What, Why and How?

WHAT? – Wikipedia says “Coaching is a form of development in which a person called a coach supports a learner or client in achieving a specific personal or professional goal by providing training and guidance.”

WHY? – If the coaching centers are criticised, then the question arises why? The growth of such centers is because of the people who wish to see themselves or their wards crack the JEE. And why these people believe in these coaching centers? – RESULTS. Coaching Institutes like Allen, CareerPoint, Bansal, FIIT JEE, Resonance etc. have been producing JEE qualifiers since their inceptions.

HOW? – How the coaching centers have grown, here are the factors that an IIT Professor have himself pointed out:

A) The hype about the examination being a very big deal; B) Media coverages advertising the toppers and rankers; C) Beliefs that coaching centers are a necessity to crack JEE

Further, Anurag Mehra is a Professor of Chemical Engineering and Associate Faculty at the Center for Policy Studies, at IIT Bombay, says that the hype surrounds JEE so much that children enroll for coaching class “packages” (worth a few lakhs per annum, at least) from Class 6 or 8 onwards. – As quoted to NDTV.

He has also added that for many decades, the IITs were attractive because the B.Tech degree was a passport to the West. However, now the attraction is because of the humongous pay packages (“1 cr+”) that graduating students receive at the IITs.

A very few students, and only in a few engineering disciplines, receive such offers. The average package is typically around Rs. 10 lakhs, and many packages are less than this. Reveals Anurag Mehra

Thus the hype factor that leads to joining more and more students enrolling for the coaching centers is somewhat just climbing the bandwagon.

There is a saying you can hate them, but you cannot ignore them. Thus, the coaching system in India is somewhat the same. Many might criticise, but their contributions and Result are proof that they are worth it, this cannot be ignored.

For instance, in JEE Main 2019 January attempt, 15 candidates have achieved a perfect 100 percentile. 6 out of total such 15 students are from coaching institutes of Kota with 5 students alone from Allen Career Institute Kota.

These were the students who took coaching and cracked JEE Main 2019 January Attempt with a perfect 100 percentile. On the other hand, one of the other top 15 candidates, Shubhankar Gambhir, is said to have taken coaching form Resonance, Kota. State topper of Nagaland, Kartikey Chandra is also from Resonance.

Also, another coaching center, Motion IIT, claimed that their 17 had scored 99.9 percentile in JEE Main 2019 January.

Coaching Centers – In a Nutshell, What Role Do They Play?

A very major one. Going by the recent trends the preparation to crack JEE takes effort, planning, and execution. The students who are good at it rely on self. The student who needs help spend a certain amount to get that help from the professionals. Some find it suitable, some find it a loss of self-reliance, time and money. They, however, are playing a great role in JEE preparation and cracking the exam as is clear from the data above in this article.

Have opinions favoring the above article or contradicting it – do comment below!