Students, educators, activists across the country have filed various cases for different courts to look into the matter.

Several people in positions of responsibility have spoken out against the new discriminatory clauses.

As per our request @Shehla_Rashid and JNU president Mohit K Pandey approached HRD ministry and given memorandum to them.
Next planing is meeting with HRD ministry and PC .
Thank to all of you for our help.#NEET2018 #NIOS #irregularities pic.twitter.com/jLRAPYcwPN

Another set of candidates who are ineligible are those who have studied 10+2 from open school or as private candidates (Read: No NEET 2018 for open school and private candidates). There are twelve open school boards in India, and at least a few thousands of them were planning to appear in NEET, aspiring to be a doctor some day. Their dreams have been shattered as they had no clue that out of the blue they would be deemed ineligible for an entrance exam.

That’s not all. Students who studied biology/biotechnology as additional subjects are also not eligible.

A large number of students who had toiled for years to appear in the medical entrance exam have now been deemed ineligible.

#NEET2018
Affected Candidates are advised Not to Waste Money in other High Court of India
All the 3 cases of #NEET (age limit/NIOS+Private/additional biology)
are already submitted in Delhi HC
Moreover Becoming Petitioner in same case in 2 different courts is illegal pic.twitter.com/mMyf5PFC1u

are already submitted in Delhi HC

On the other hand, CBSE has issued a notice. 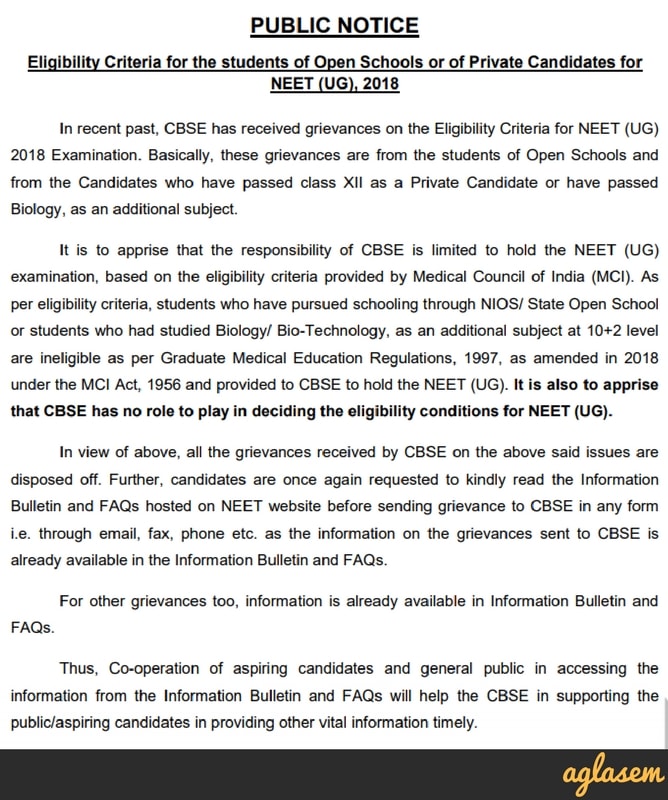 “In recent past, CBSE has received grievances on the Eligibility Criteria for NEET (UG) 2018 Examination. Basically, these grievances are from the students of Open Schools and from the Candidates who have passed class XII as a Private Candidate or have passed Biology, as an additional subject.

It is to apprise that the responsibility of CBSE is limited to hold the NEET (UG) examination, based on the eligibility criteria provided by Medical Council of India (MCI). As per eligibility criteria, students who have pursued schooling through NIOS/ State Open School or students who had studied Biology/ Bio-Technology, as an additional subject at 10+2 level are ineligible as per Graduate Medical Education Regulations, 1997, as amended in 2018 under the MCI Act, 1956 and provided to CBSE to hold the NEET (UG). It is also to apprise that CBSE has no role to play in deciding the eligibility conditions for NEET (UG).

The board is right. CBSE indeed does not have a say in who becomes eligible or ineligible for NEET. CBSE in fact conducts several entrance exams including JEE Main 2018 which is scheduled to be held in April, UGC NET 2018 which will be held in July, to name a few. The board is only responsible for conduct of exam and declaring its results. Rules of these exams are governed by different bodies.

In the case of NEET, decisions are taken by MCI (Medical Council of India).

Two days ago, various newspapers reported that the Supreme Court has refused to interfere on age limit. There are high chances that the age limit is here to stay.

The matter – of age limit in NEET exam – caused much controversy last year also. In 2017, MCI imposed age limit but on March 31, 2017, the upper age limit was removed. Thereafter the last date to apply was extended to April 5.

Will history repeat itself?

Many students and activists are rallying hard to get some changes introduced. Final decision of the court shall be binding in all matters.

In your opinion, are there any chances of SC intervening in any of the matters – NEET 2018 age limit, open school candidates, private candidates, additional biology – and changing the criteria?

TNSET 2018 Hall Ticket: Out for one subject, releasing for others at 5 PM on tnsetexam2018mtwu.in

All About JEE Main 2018: From Exam Date, Admit Card To Preparation

Goa CET 2021 Prospectus To Be Released by Month End: DTE

All About JEE Main 2018: From Exam Date, Admit Card To Preparation