Indian Institute of Management (IIM) Calcutta will release the Common Admission Test (CAT) 2018 Admit Card on October 24, 2018. It will release exactly 31 days before the day of the examination ie November 25, 2018. Though it is possible that the hall ticket may release a few days after the officially scheduled date.

Last year, the admit card was issued 7 days after the official releasing date. The hall ticket was scheduled to release on October 18, 2017, but issued by IIM Lucknow on October 25, 2017. Here are the previous year trends represented in the image below. 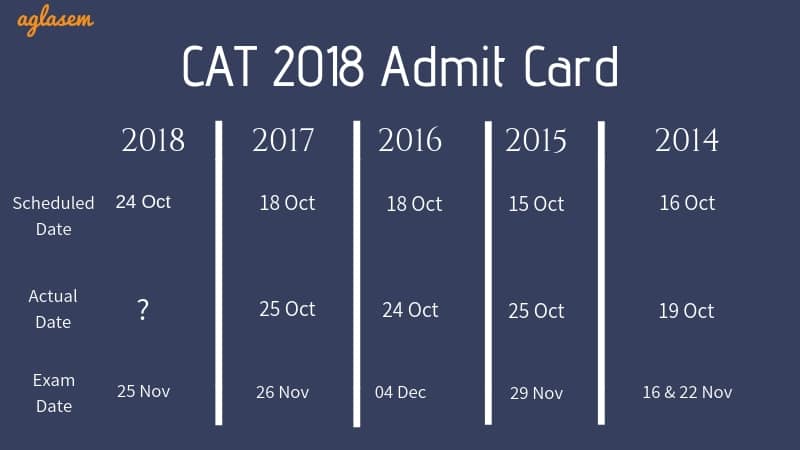 In case the admit card is not available on time then do not panic and keep checking the official website for latest intimation. Candidates will able to download it until the day of examination. After that, the window will close to access the CAT 2018 Hall Ticket.

After the completion of the registration process, it is necessary to download the admit card to appear for the exam. It will also act as a proof of the successful registration. It will be available at iimcat.ac.in and can be accessed after entering the registration number and password.

On the examination day, a candidate just needs to carry admit card with a photograph pasted on it and a photo identity proof. Apart from this, a student will not be allowed to carry any other item in the exam hall. Before the starting of the exam, each test taker will receive a pen and notepad for rough work. A candidate can also request extra sheets (if required). For PWD candidate additional facilities will be available as asked by him/her during the registration process.

It is advisable that candidates do not download the hall ticket in the end. Accessing it earlier will help students to rectify the errata (if any) in the admit card. The error will only be corrected if it deviates from the details mentioned by a student on the registration form. Notably, a candidate can’t request a change in the exam centre or city.

CAT examination is known for strict checking before the examination. Each candidate will have to go through the biometric and document verification process. Thus, candidates are advised to not apply Henna or any other mark on the hands that can create obstructions while taking the thumb impression or fingerprints. Importantly, carry comfortable clothes on the exam day and wear shoes/ sandals/ slippers in which toes are visible.

Until now, it is not confirmed if there will be any changes in the exam pattern. According to IIM Convenor, the paper will be designed after keeping the students from commerce and Arts background in mind. This is to promote diversity in the MBA course. Though candidates must be prepared for any changes, just build the basics strong and keep taking the mock test for the better preparation.

CAT 2018 Application Correction window has not been opened by IIM Calcutta. Though lots of students were expecting for the correction window. So that changes can be done accordingly and to avoid the rejection of application in later stages of a selection process. Since nothing can be done now, candidates must focus on preparation only. Students must not worry as the CAT form is considered by IIM’s only, for the rest of the institutes’ students have to fill the separate form.

There are many all India management entrance exams for which registration are open like NMAT, SNAP, IRMA etc. For TISSNET 2019, the registration window will open from October 22, 2018.