ICAR-AIEEA 2018 New exam dates have been released through an official notification released by the Indian Council of Agricultural Research (ICAR). The students who had earlier appeared for the exam in the online mode have to appear for the exam. The AIEEA-PG-2018 exam is now going to be conducted again on September 16, 2018. The official notification got released by the ICAR on September 10, 2018. \

The decision for the cancellation and rescheduling of the exam is taken by the Hon’ble High court of Kerala at Ernakulam. The court was earlier prayed for the rescheduling of the exam that was going to be conducted on August 18, 2018. Students can now take a breath of relief as the court has given its approval and now the exam is going to be conducted on the new date.

However, now, the AIEEA-PG 2018 exam is going to be conducted in the offline mode and it is compulsory for the students to reappear in the exam. According to the recorded data, not more than 57% students had appeared for the exam. Many people pleaded that the exam conducted by the ICAR on August 18, 2018 was nothing but a big mistake. The exam got conducted under such disastrous circumstances that it became next to impossible for the students to appear for the exam. 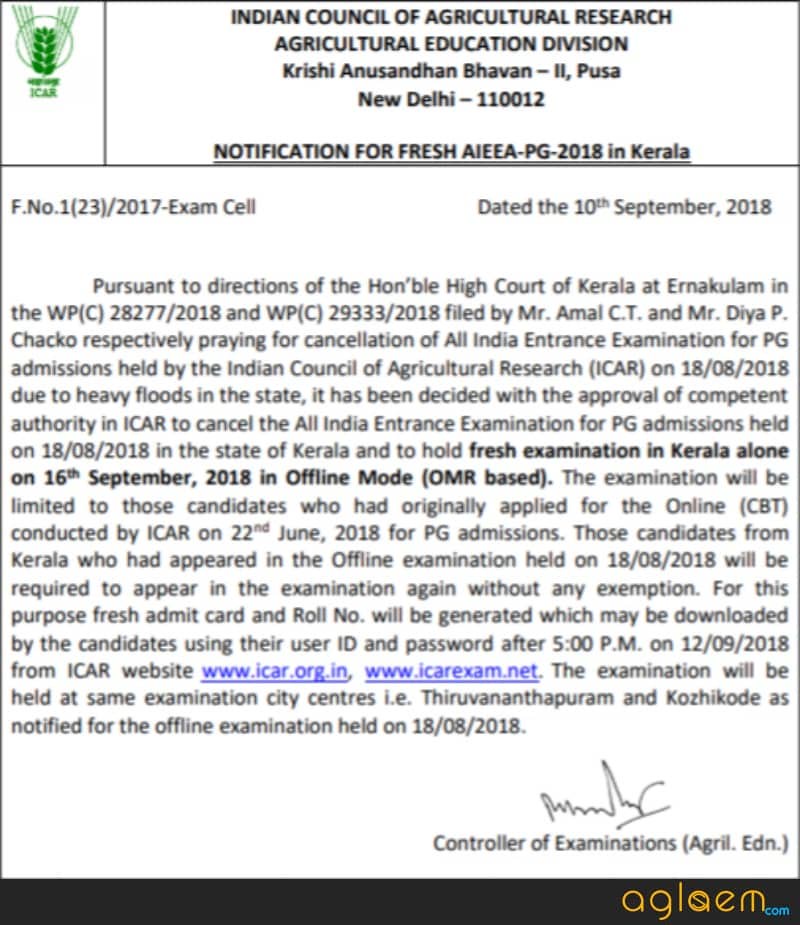 The exam is going to conducted only for the students who had applied for the August 18, 2018 scheduled examination. Thus, no new application forms will be filled. Candidates are also informed that the previous Admit Card issued to them is not anymore credible and they have to download a new AIEEA 2018 Admit Card. To  download admit card, the procedure is same, i.e visit the official website of ICAR, icarexams.net. Once on the official website, the students have to provide the login details and the new admit card will appear on the screen. After checking all the details the students have to take a print of the Admit Card and Keep copies of the same with you till the complete procedure gets over.