The Himachal Pradesh Board of School Education has announced the SOS result.  HPBOSE released the result yesterday i.e. on October 31, 2018. The HPSOS Result 2018 has been declared for class 8, class 10, and for class 12. Candidates who had appeared for the board exams from Open School can now search for the result at hpbose.org.

For class 8, the Himachal Pradesh Board of School Education has released the pdf file. In the pdf, the HPBOSE has mentioned the number of students who took part in the exams, passed the exams and those who got the status as the compartment. In the September month exams, a total of 139n candidates gave the exams. Out of the total students, 78 passed the exams while 52 students got the result as the re-appear. As the board has already mentioned that the candidates can appear for the board exams only for 5 years. So, after the time finished, 1 student has been declared failed. In this way, the overall pass percentage of the students is 56.12%.

The revaluation process has also been started. So, those candidates who are interested in this process can now fill the form. The last date to apply is November 15, 2018. For each subject, the students will have to pay Rs. 300. 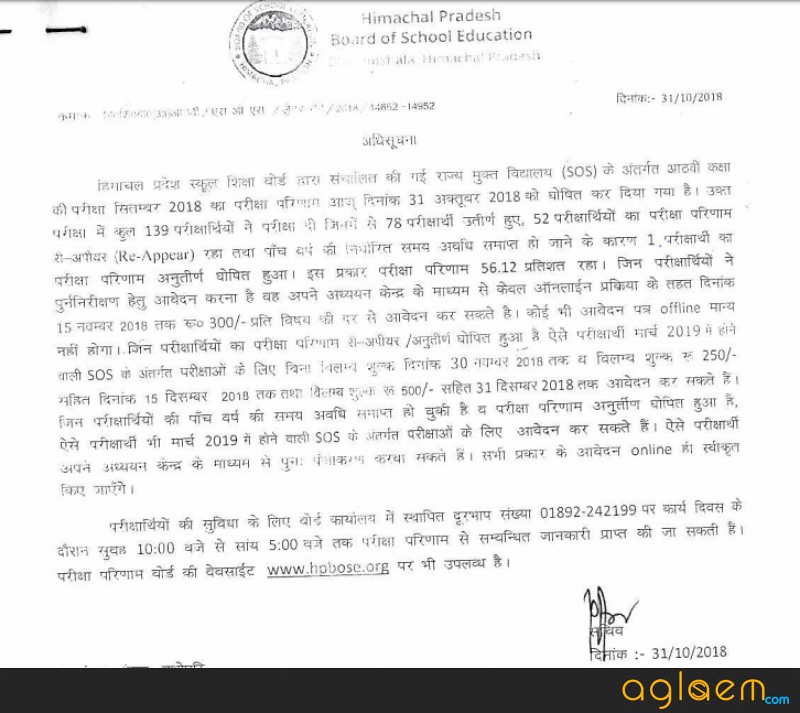 The board which is responsible to provide the education in Himachal state is HPBOSE. The full name of the board is Himachal Pradesh Board of School Education. HPBOSE was established in 1968. The headquarter of the board was in Shimla first but it has been shifted to Dharamshala. HPBOSE conducts the exams for class 10 and 12 both. Along with the regular exams, the board also conducts the open school exams for the same classes. For the open schools, the board conducts the exams twice a year. Apart from this, the Himachal board also takes cares of the students of class 8th and follows the same process as that of class 10th and class 12th.