National Testing Agency (NTA) has released the NEET- 2019 Application Forms. The application has been released on November 01, 2018, along with all its other important dates and details. NTA has specified photo and signature details for the application form. It is an absolute necessity for the candidates to upload a photograph and signature in the prescribed format, only then the form will be accepted.

Photograph in which a candidate is wearing a cap or goggles will not be accepted. Instead, a candidate must be looking into the camera, facing straight so that the eyes and ears are visible in the photograph uploaded. Printouts of the computer generated photographs or Polaroid photographs will also not be accepted by the National Testing Agency for NEET UG 2019 application, counseling or admission. Also, make sure the photograph uploaded is of a good quality or should be clear.

Applications of those candidates will be rejected whose photographs don’t match up to the specifications, listed. NTA has clearly stated that it won’t be accepting digitally modified pictures or any sort of fabrications done to the uploaded picture. And strict actions will be taken to deal with such unfairness, along with the cancellation of the candidature, as per the NEET UG 2019 rules.

Now, as far as the signature is concerned, it must fit in the box or space provided in the NEET 2019 Application Form. The uploaded image of the signature should be in running handwriting, without any corrections or double writing or scribbling on it. Candidate’s initials or any other fancy type of signature would n’t be acceptable by NTA. Also, writing candidate’s full name in capital letters, would not be treated as the signature, that needs to be uploaded as per prescribed guidelines.

Separate spaces will be provided for photograph and signature to be uploaded. A candidate must make sure that he or she uploads these respective documents over the respective fields. The size of the scanned image of the signature should be between 4 kb to 30 kb in .jpg/.jpeg file format. By the technique of face detection, a candidate will be allowed to upload a photograph with one face from his or her device. A similar photograph needs to be carried by a candidate on the actual day of the exam. 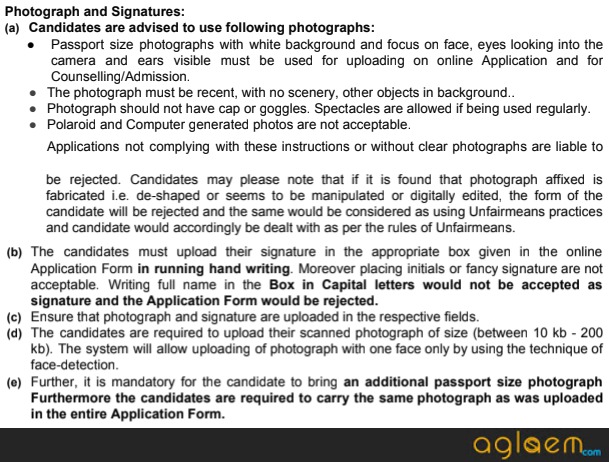