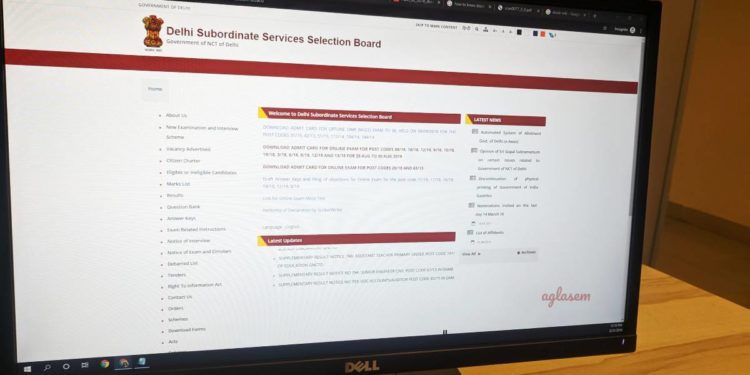 Delhi Subordinate Services Selection Board released the admit card for post code 20/18 that is Grade 4 DASS yesterday. The board has scheduled online exams for this post on September 3, 4, 5, and 6. Admit card download link has been provided at dsssb.delhi.gov.in, which leads to candidate login, where, those who had applied for DSSSB 2/2018 advertisement for said post can login with application number, date of birth in order to download their hall tickets.

Post code 20/18 has a total of 79 vacancies. Class 12 pass candidates were invited to apply for the post last year. The exam dates for single tier exam for Grade 4 DASS / Junior Assistant was published earlier this month, via a notification on August 10. Exam for the purpose of selection for this post will have six sections.

The six sections of the exam shall be general awareness, mental ability and reasoning, numerical ability and data interpretation, test of hindi language, test of english language, basic familiarity with computers internet social media and office automation. Each of the first five section will have 35 questions of 35 marks, whereas the last one will have 25 questions of 25 marks. Negative marking will be there in exam, to the tune of 0.25 marks per incorrect answer.

Since the admit card has been released, the official website of DSSSB, dsssb.delhi.gov.in, is sometimes not opening. This is most likely due to heavy load on the server as a number of candidates are trying to access the site to download admit card. It could be due to other technical issues. However, if candidates face difficulty in downloading hall ticket due to this, they may try again after some time or in off peak hours.

DSSSB is also conducting exam for post code 63/13, advertised in advt no 03/13 on September 3. Admit card for 63/13 post code that is PA to Secretary is also available at the same link where DSSSB Grade 4 DASS admit card 2019 is available for download via dsssb.delhi.gov.in.

For these post codes, DSSSB had also mentioned that those who are unable to download admit card can contact board office through email ID [email protected] up to September 4, 3 pm. Furthermore the last date to download these posts’ admit cards is September 4 only.

DSSSB – Delhi Subordinate Services Selection Board – is the single organization in Delhi that looks after recruitment of various posts across a plethora of departments. From teacher to stenographer, lower division clerk to managers, all posts recruitment happen through DSSSB. The board conducts online, as well as offline exams.