On Tuesday, CBSE announced that the exams which were supposed to be held on April 02, 2018 is now going to be conducted on April 27, 2018, in Punjab state. Due to Bharat Bandh, the CBSE exams were postponed in Punjab. Several Dalit organizations protested against the dilution of SCs/STs (Prevention of Atrocities) Act. Then the board received a request letter on April 01, 2018 in which the Director-General of Punjab Government appealed to postpone the exams. So, at the state government request, Central Board of Secondary Examination decided to re-conduct the exams.

CBSE has released the notice regarding the re-conduct of the exam in Punjab state. The notice has contained the date of the exam, day of the exam, subject code and subject name. The exams will be re-conducted for both the classes, 10th, and 12th. The exam date for both classes is same. The timing of the exam is 10:30 AM to 1:30 PM. 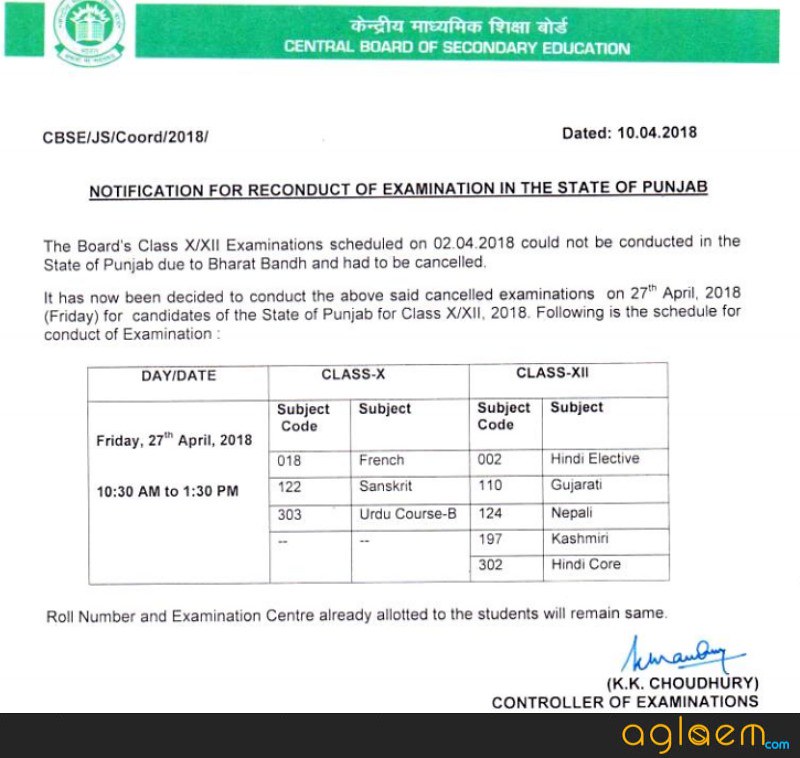 It is to be noted that the allotted Examination Centre and Roll Number will not be changed. So the students will have to appear at the same exam centre in which they had given the previous exams.

Re-exam of class 12 Economics or new dates for Punjab will not affect CBSE 12th result 2018 declaration. It will be announced on same date for all states. So Punjab candidates need not worry about getting delayed results.

Same can be said for CBSE 10th result 2018. Class 10 students, who will now start studies of class 11, will get class 10 result on same date as in other states. There shall be no delay in class commencement for having a later exam date.

Central Board of Secondary Education is well known as CBSE. It is a very popular board. CBSE is a national level board for the public and private schools. There are approximately 19,316 schools in India which are affiliated to CBSE. The board has prescribed to follow the syllabus of NCERT for all the affiliated schools. The board decides the syllabus, releases the circulars, conducts the exams and after the exams, it also releases the result. CBSE is not just limited to the 10th and 12th class education. It also conducts AIEEE, JEE Main, All India Pre Medical Test (AIPMT), NEET, Central Teacher Eligibility Test (CTET).

NEET 2018 Admit Card release date as per CBSE; Know how to download at cbseneet.nic.in