A few days back, a major issue regarding the leak of class 10th Mathematics and class 12th Economics paper evolved which created many problems for the students and the CBSE as well. Protests by many students and parents against the decision of CBSE for reconducting those leaked papers were going on and at the same time another problem also stepped in. The renowned board which has recently been facing a lot of issues regarding paper leaks and rescheduling of class 10th and 12th examinations issued a statement saying it had received a letter from Punjab’s Director General of School Education who flagged security concerns in the state.

Exams will carry on as per schedule in UT of Chandigarh and rest of the country!! 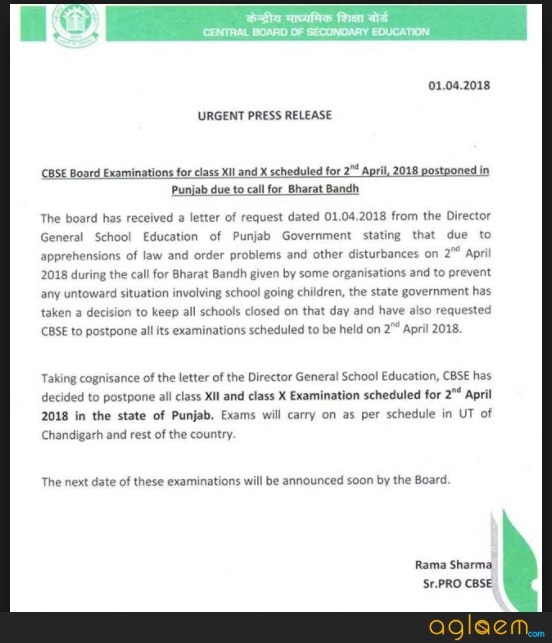 After analyzing the complete situation and processing it, finally, CBSE has also accepted Punjab government’s request of posponing the exams that were scheduled to be held today. Taking cognizance of the letter of the director general (school education), the CBSE decided to postpone all class 12 and 10 examinations. Now, CBSE has confirmed that it will postpone all class XII and Class X Examinations that were scheduled for April 02, 2018 in the state of Punjab. CBSE will announce the dates for conducting the exams very soon.

Various Dalit organizations have called for a ‘bandh’ on April 02, 2018 and they are expressing concerns and views over the alleged “dilution” of SCs/STs (Prevention of Atrocities) Act. The state government has stopped mobile internet across Punjab till 11 pm today to prevent rumors and fake information, which could spark violence and create disturbance in the peace of the people, added by home secretary Rahul Tiwari. Banks and schools will remain shut and the services of public vehicles such as buses and taxi will also be stopped. Hence, the Punjab government has ordered the suspension of bus services and mobile internet services to prevent the spread of misinformation through platforms of social media. Also, an official spokesperson of the Punjab government in Chandigarh said the public transport services across the state has been suspended in view of the bandh call.

Protesters are generating violence everywhere. They are damaging the public vehicles, railway tracks and many more things. In Dehradun, protesters are forcibly shutting down the shops and markets. Also, rail tracks are being blocked in Ghaziabad. Protesters have taken out a march in the national capital. In Jaipur, train movement was stopped. Uttar Pradesh CM Yogi Adityanath said that the governments (central & state) are working towards the welfare of backward castes, SC & ST. He also said that if the backward castes have any problem or issue then they should bring them to government’s notice. Chief Minister Yogi Adityanath has appealed protesters to maintain peace and remain calm by saying that the central government will be doing everything that is possible for the betterment of the backward castes.