This is the fifth time that BSTC counselling result 2019 dates have been changed. 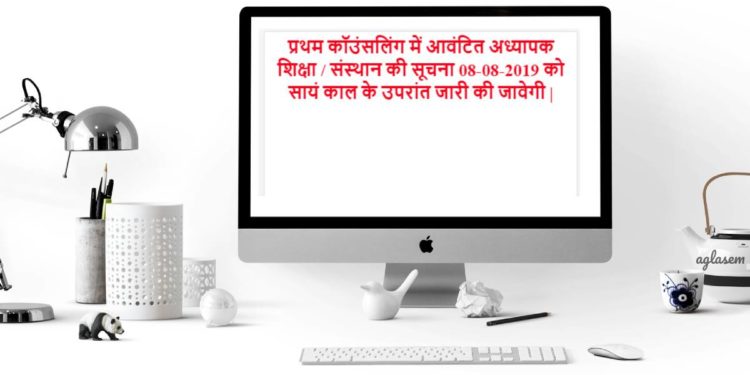 Rajasthan Department of Education (RDE), Bikaner has once again postponed BSTC counselling result 2019 and issuance of college allotment letter. As per the latest update put up on the official website btsc2019.org, result of first round of seat allotment will be now be announced on August 8, 2019, after evening.

The official website is now directly opening on a new page bstc2019.org/BsTcCoN2019/vcnt.php where only a single message is displayed. It is one sentence in Hindi that says “pratham counselling me aavantit adhyapak shiksha / sansthaan ki suchna 08-08-2019 ko sayam kaal ke upraant jaari ki javegi” which translates to “details of teaching education institute allotted in the first round of counseling will be announced on 08-08-2019 post evening”.

Until late night yesterday, the website was displaying all the details of Rajasthan Pre D.El.Ed. (BSTC) 2019 exam including all four revised counselling schedules, new colleges added, colleges removed, counselling dates. However, now that page is not opening and only the status of allotment results is being shown.

Now at bstc2019.org, counselling result will be available as per the new schedule and then candidates will be able to login with roll number, counselling serial number, and date of birth. This would display the college allotment result. Either a candidate does not get a seat, or gets a college whose name and code are displayed. In the latter case, candidate has to pay fee and report by August 13, 2019. Candidates who are allotted a college can download BSTC college allotment letter from the same login.

Up until now the second allotment result after upward movement is supposed to be announced on August 16, 2019, and fee payment and reporting for that round is supposed to be done between August 17 to 19, 2019. There is no update yet on whether the delay in first list will affect the second one or not.

7,51,127 Candidates had registered for the Rajasthan Pre-D.El.Ed 2019 exam, and 92.47% had appeared. The exam was held in 33 districts of the state at 2,212 exam centres. Praveen Kumar grabbed the first rank in general, and Manisha topped in sanskrit colleges list.