It has been more than 2 months since the registration for RRB Group D closed. The candidates all over India are waiting for the exam dates, which Railway Recruitment Board did not announce with the release of CEN 01/2018 and CEN 02/2018. But now, it seems like the wait is over. According to various newspaper reports, the CBT for Group D Recruitment will be held on August 12, 2018.

The official notification confirming the date is yet to be released. However, there is a high possibility that the expected date might be correct because as per the brochure the exam was to be held on April / May but the months have passed by.

The admit card for RRB Group D 2018 exam will be released one week before for the examination. It will be issued online, only for those candidates who submitted the application form and fee in the prescribed format. The candidates will be able to download it from the official website of the opted RRB, i.e. RRB Ahmedabad, RRB Ajmer, RRB Allahabad, RRB Bengaluru, RRB Bhopal, RRB Bhubaneshwar, RRB Bilaspur, RRB Chandigarh, RRB Chennai, RRB Gorakhpur, RRB Guwahati, RRB Kolkata, RRB Mumbai, RRB Patna, RRB Ranchi, and RRB Secunderabad.

The RRB Group D CBT 2018 will be conducted in online mode. There will be in total 100 questions in the exam, which will be asked from Mathematics, General Intelligence and Reasoning, General Science, and General Awareness on Current affairs. Candidates will get 90 minutes to attempt the exam and for choosing an incorrect answer, negative marking of 1/3 per question will be implemented.

The new reports are also suggesting that the distribution of questions in the exam will be – 35 for Mathematics, 20 for General Science, 05 for Current Affairs, and 40 for General Knowledge. However, there is no official confirmation yet. To prepare for the exam, candidates will have to study as per the syllabus, which is as follows: 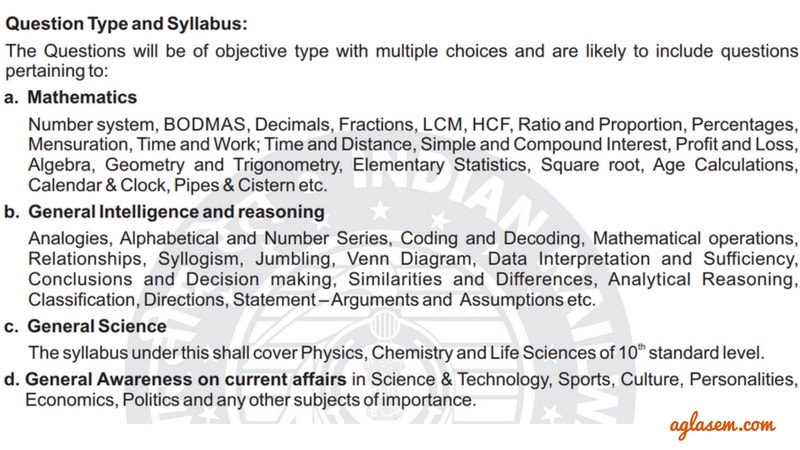 To qualify CBT, candidates need to score minimum qualifying marks in the exam. The RRB Group D Cutoff for CBT is 30% for UR, 30% for OBC / SC / ST candidates. Candidates who will score upto or more than the cutoff will get the call letter for PET.