Railway Recruitment Board (RRB) has postponed the Group D 2018 Exam in West Bengal, Odisha and as well as in Bhopal. This decision has come around as many candidates were unable to appear in the exam centers due to Bandh in West Bengal and Adivasi Protests in Odisha. However the reason to postpone the exam in Bhopal is not clear. However, many city reports have said it was due to the BJP worker’s conference.

As per the news reports candidates of these 3 affected areas will be getting new RRB 2018 exam dates. The candidates who were unable to reach the centers will be able to reappear in the exam after October 16, 2018. Such candidates will be also intimated about the new exam time and venue through website, emails and SMS. 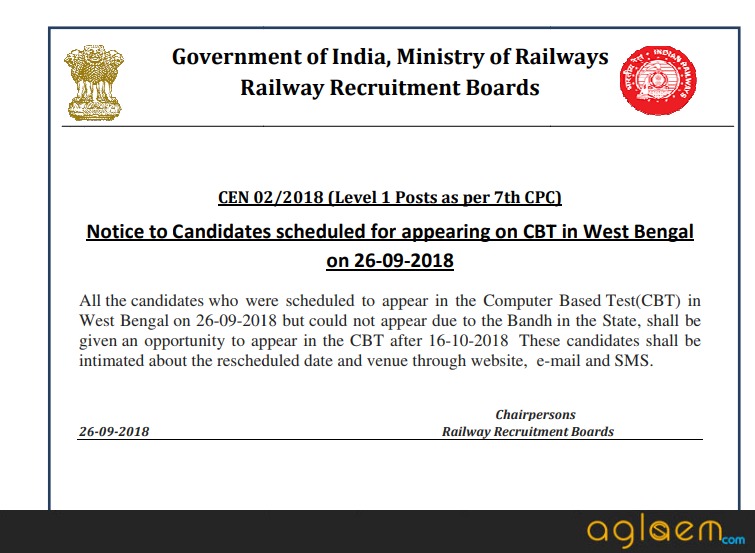 Train services in South Eastern Railway’s (SER) Kharagpur division were affected since 6 AM during the Bandh day. The reason for Bandh was blockade by an umbrella organisation of the Adivasis demanding recognition of their language.

RRB Group D 2018 exam started on September 17, 2018. The exams are scheduled to go on till December 14, 2018. The admit cards are being issued 4 days prior to the CBT exam date. The candidates are instructed to login and download the RRB Group D 2018 Admit Card at their own responsibility as no admit card is being sent via mail or post.

The candidates who will qualify RRB Group D online test will have to appear for Physical Efficiency Test (PET). Those who will qualify the PET, are then called for the Document Verification (DV) rounds. On completing the entire 3 level – CBT, PET and DV, final recruitment is made.