Railway Recruitment Board (RRB) has issued a notice to state the causes for delay in the RRB Group D 2018 and RRB ALP Technician 2018 computer based test. As per the issued notice, the Board was to conduct the exam in the month of April / May 2018. However, due to the unprecedented response from 2.37 crore applicants, the scrutiny of application form has stretched unexpectedly. 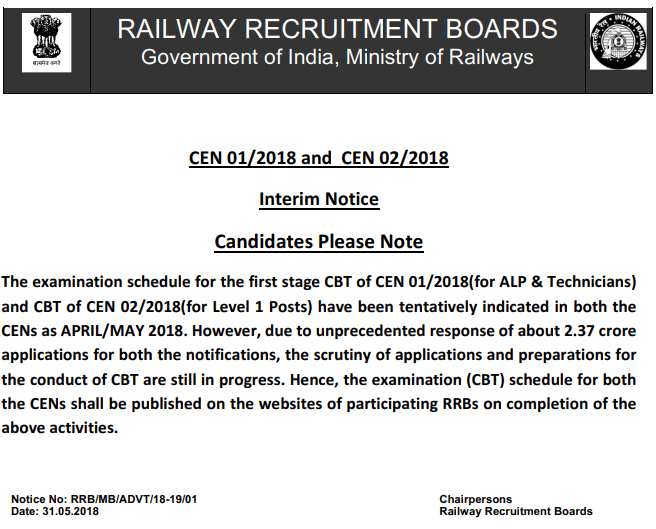 The notice also clarifies that the actual dates for CBT will be announced after the completion of the application checking. However, there are certain newspapers which have reported that RRB Group D 2018 will be held on August 12, 18, 26 and September 09, 16, 2018. These news reports also claimed that to appear for the examination, the candidates will be called alphabetically.

Despite such detailed description, it too early to pronounce the dates as confirmed. Now that the RRB has released the official notification that the dates will be announced later on, the candidates also find it difficult to trust the papers. This is not the first time when dates for the tentative date of RRB Group D exam are making round. Even last month, dates for the exam were circulated online but it turned out to be untrue.

Candidates may expect the exam to be held on the above mentioned dates. Yet, the final dates will only be announced by Railway Recruitment Board. Along with the exam dates, the Board will also reveal the dates for the release of RRB Group D Admit Card. As per the information brochure, the admit card will be available 10 days before the examination. It will be available online, on the individual website of the RRB.

Stay with us for regular updates on RRB Group D Exam Date, application status, admit card, and more. You can also leave your queries in the comment section below. We will try and resolve it as soon as possible.