On November 06, 2018, Railway Recruitment Board (RRB) has released the notice regarding examination dates and city for the canceled examination of Group D 2018. Due to heavy rain and massive cyclone, the situation of the state became worse and candidates could not appear on the exam center, so after consideration of the situation, RRB Bhubaneswar canceled the exam. The exam was supposed to be held on October 11 & 12, 2018. The exam cancellation notice released on October 10, 2018, on the website of RRB.

The candidates who had the examination in Odisha State on the said dates are now able to check the exam date and city through candidate login on the website of RRB. The link has been activated for the various Level 1 posts against CEN 02/2018 in cities Bhubaneswar, Cuttack, Dhenkanal, Sambalpur, Khurda and Berhampur.

Now as per the current notice of RRB, the re-exam will be held in November and December 2018. Apart from releasing the notice, RRB has sent the proper SMS and email to the candidates separately about re-exam date and city for Computer-based Test for CEN 02/2018.

The exam was scheduled to be held in cities – Bhubaneswar, Cuttack, Dhenkanal, Sambalpur, Khurda, and Berhampur. Besides of Odisha the Group D examination has not been canceled in rest of the country. 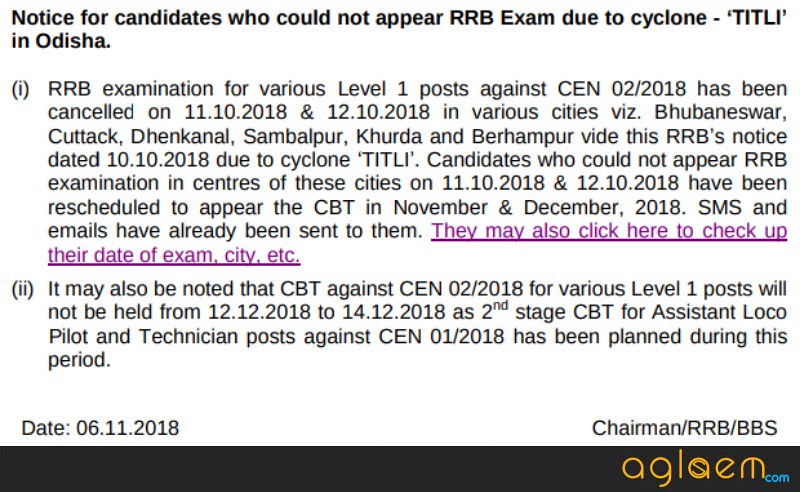 The re-exam dates have not been announced in the notice, However, using credentials candidates can check the exam details though login. The candidates will need user id and password.

Besides this, RRB refused to conduct re-exam on December 12 to 14, 2018 because of the ALP Technician stage 02 CBT will be held on these days.

The process of Group D Examination was started on September 17, 2018. As per the trend of RRB the admit card downloadable link was activated on September 13, 2018. The Board conducts the examination in three shifts of 90 minutes. The first shift is in the morning starts from 09:00 Am, the second shift begins from 11:00 AM whereas the third and the last shift of the exam is in the evening from 04:00 PM.

CCC Admit Card 2018 available for November exam at student.nielit.gov.in; Exam from 15 to 20 Nov

ANTHE 2018 Result to be Announced today at www.aakash.ac.in