Railway Recruitment Board (RRB) has made RRB ALP Result 2018 date official via a notice published on all official websites of participating RRBs. RRB ALP Result will be announced on or before 05 Nov 2018. Also, CBT 2 will start from 19 Nov 2018. In addition, the RRBs have also published one page with all Trade Syllabus for RRB ALP.

It has been confirmed via this notice that First Stage CBT result evaluation is under finalization. On basis of performance in exam, and Post Preference submitted by candidates, each RRB will publish a list of candidates who are qualifying for Second Stage CBT. RRB ALP Result will show raw scores and normalized marks both. 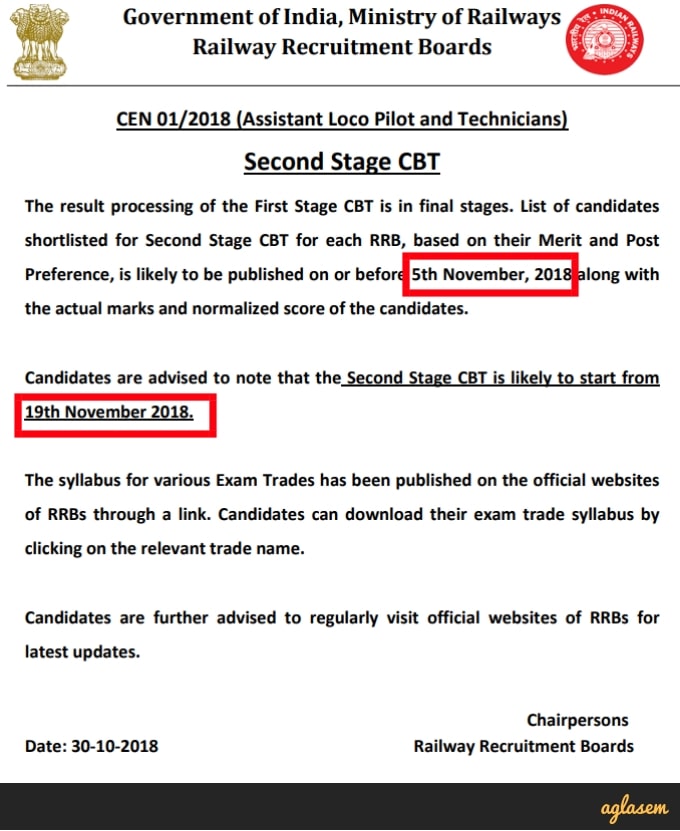 Initially, the notice was published only on RRB Kolkata official website, rrbkolkata.gov.in. however soon thereafter, every RRB published carried the notice. The complete text of the notice says,

‘The result processing of the First Stage CBT is in final stages. List of candidates shortlisted for Second Stage CBT for each RRB, based on their Merit and Post Preference, is likely to be published on or before 5th November, 2018 along with the actual marks and normalized score of the candidates. Candidates are advised to note that the Second Stage CBT is likely to start from 19th November 2018. The syllabus for various Exam Trades has been published on the official websites of RRBs through a link. Candidates can download their exam trade syllabus by clicking on the relevant trade name. Candidates are further advised to regularly visit official websites of RRBs for latest updates.’

Trade syllabus of RRB has been published for 57 trades. These include Electrician, Signal, Fitter, Track Machine, Diesel Mechanical, and all the other trades that have been mentioned in CEN 01/2018. 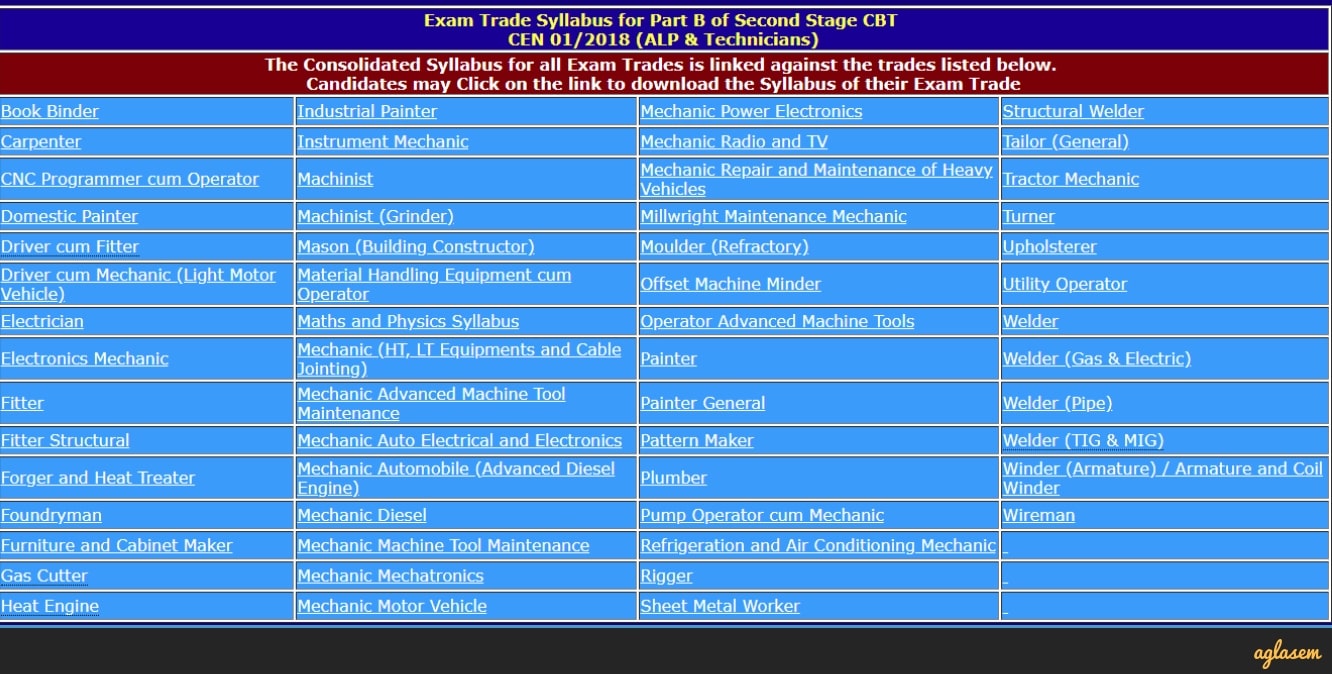 To arrive at the notices and syllabus, candidates need to visit official website of any participating RRB. There, notice of RRB ALP Result regarding date and next exam date is published with title ‘Important notice for the candidates of CEN-01/2018 (ALP & Technician posts) on SECOND STAGE CBT’. Just below it, there is another link that says ‘Click here for Exam Trade Syllabus’. The former leads to notice, and latter to trade syllabus of RRB ALP.

Even though many reports had been claiming that RRB ALP Result could be announced by 31 Oct 2018, or 5 Nov 2018, or 7 Nov 2018, now that notice is actually out, candidates are still unable to believe that results are coming out so soon. However what has shocked them actually is that RRB ALP CBT 2 will be held at such short notice.

Almost immediately after the notice came out, AglaSem had reached out to candidates on social media to inform them of the notice. It was mildly surprising to see that no one was willing to believe that such a notice has actually come. Candidates were apprehensive since so many news reports have come out in the recent past that this too seemed like another speculation. Nevertheless, as soon as the official notice came up on their screens, and once they verified from official websites, matters became clear to them. What followed next was vehement opposition to the second stage computer based test date.

Although Indian Railways has said that it will commence exam on 19 Nov 2018, since the exam will be for 9.6 lakh candidates, it is anticipated to be held over several days. Candidates who get 19 Nov 2018 only as exam date will get only 10 days time to prepare for Part A and Part B of CBT 2. Part A will have 100 questions on Mathematics, General Intelligence and Reasoning, Basic Science and Engineering, General Awareness on Current Affairs. Part B will have trade syllabus prescribed by DGET. Candidates are largely worried about Part B because its syllabus is huge.

What do you think of this notice? Share your views on RRB ALP Result in comments below.