Railway Recruitment Board (RRB) announced that RRB ALP Stage 1 Result will be announced by November 05, 2018. The processing of result for Stage I CBT is in the final stages and RRB is ensuring that the result is error free. For the past few days, various newspaper reports and unofficial sources were publishing the numerous dates for declaration of the result. However, now the Board has finally put a full stop on all the predictions and has announced official RRB ALP Stage 1 Result date. 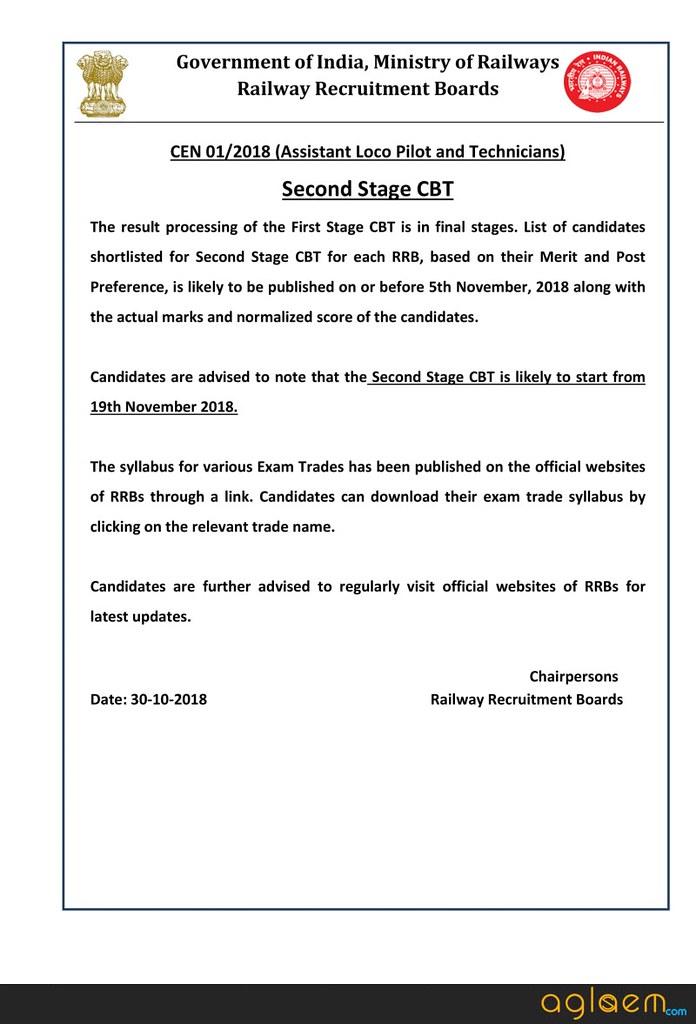 About nearly 48 lakh candidates applied for the RRB ALP Recruitment 2018. The result for RRB ALP Stage I CBT 2018 will be available on official website. To check the result, the candidates need to visit the official RRB regional website. Then click on the link which says “CEN 01/2018 – Check RRB ALP & Technician Result”. A candidate login page will appear on the screen in which the candidates will have to enter details such as User ID and Date of Birth. Click on the “Login” button to submit the details. On submitting the login credentials, the result of the candidate will appear on the screen.

Know: How to get RRB ALP Technician 2018 Registration Number?

Cut Off to Qualify for Stage 1 CBT

The Board has also confirmed that it the Second Stage CBT for RRB ALP Technician Recruitment 2018 is likely to start from November 19, 2018. The candidates will be shortlisted for the second stage on the basis of the marks obtained in the Stage I CBT. Those who will be shortlisted for the RRB ALP & Technician Stage 2 CBT will be issued the admit card for the same. It shall be available for download at least 10 days before the test. No call letter for second stage CBT will be sent to candidates by post.

The Board recently also provided a facility for the candidates for submission of additional qualifications, option for RRB, Post preferences, Exam trade, and Bank details. The last date to submit these details was October 22, 2018. Hence, those who did not complete this activity will not be considered for shortlisting to 2nd stage CBT.

The Board conducted the first stage exam of Assistant Loco Pilot (ALP) and Technicians from August 09, 2018 onwards till August 31, 2018. As per the newspaper reports, a record 74% of candidates were present in the first shift of the railways’ mega online exam for more than 60,000 vacancies. On the first day of the CBT, around 1,19,110 candidates out of 1,61,332 gave the exam at 416 centers across 160 cities of the country.