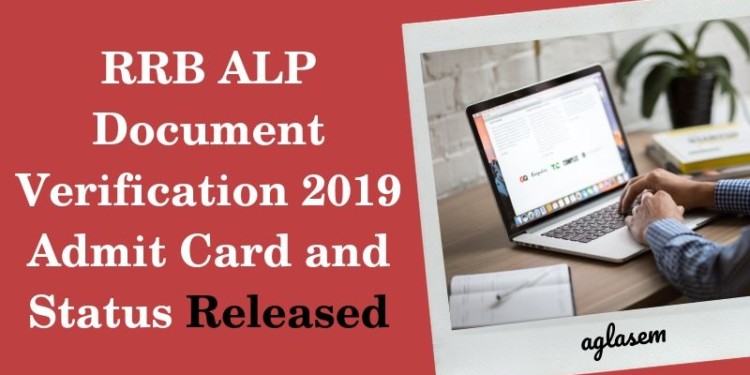 The Railway Recruitment Board (RRB) has released the RRB ALP Document Verification 2019 Admit Card and Status. The admit card is released in online mode at the 21 official websites of the RRB. Candidates who have passed the RRB ALP CBT 3 successfully are now going to undergo the document verification round.

To download the RRB ALP Document Verification Admit Card, visit any of the official websites of the RRB. Now, click on the appropriate link “Click here to view CBAT Score and qualifying status of candidates who have appeared in Computer-Based Aptitude Test (ALP & Technicians Posts)” Then, the students need to enter the user id and password. After entering the details, click on the “Login” button. The RRB ALP Admit Card for Document Verification 2019 is going to appear on the page. Download and take a print out of it to carry it on the day of the examination.

E-call letter contains important information like date and venue, timings, important instructions, complete address of the test centre, reporting time, etc. Candidates must keep it carefully until the recruitment process gets over. The board has also released the RRB ALP Document Verification Status 2019. Through it, students can know whether he or she is eligible to take part in the document verification or not. The status of the Document Verification is either “Yes” or “No”.

For the RRB ALP Document Verification, the candidates need to carry the original as well as two sets of self-attested photocopies of the same on the allotted date, time and venue. The documents can only be presented in English or Hindi language. If the certificate is in some other language then one must produce the self-attested translated version of the same on the day of document verification. Failure of the submission of the necessary documents will result in the cancellation of the candidature.

RRB ALP and Technician 2018-19 recruitment is open for 64371 vacancies. Out of which 27795 is for Assistant Loco Pilot (ALP) and 36576 is for the Technician Posts. The shortlisting of the candidates is on the basis of CBT 1, CBT 2, CBT 3, followed by the document verification as per the posts applied. For the final appointment of the post, it is necessary for the candidates to clear the medical exam.