Railway Recruitment Board (RRB) started RRB ALP & Technician 2018 computer based test today. The examination is being conducted for 48 lakh aspirants who will appear for the exam on August 09, 10, 13, 14, 17, 20, 21, 29, 30, or 31 dates. The examination is held at national level and the candidates all over India are appearing for it.

On the day one of the RRB ALP CBT, disturbance has been reported in the examination. Due to some technical error, RRB had to cancel the 2nd shift examination, at iON Digital Zone iDZ 2, Ghaziabad (TC Code-8992) center.

In all, 186 candidates have been effect by the cancellation of the examination. However, RRB has assured that the candidates need not worry, as the exam for these candidates will be held again within 1 month.

RRB will issue new exam center and date to the candidates. Even new admit cards will be issued. The Board will inform candidates through e-mail and SMS. Hence, it is important that the candidates stay alert regarding the intimations. The official notice sent by RRB regarding the cancellation of the examination is as follows: 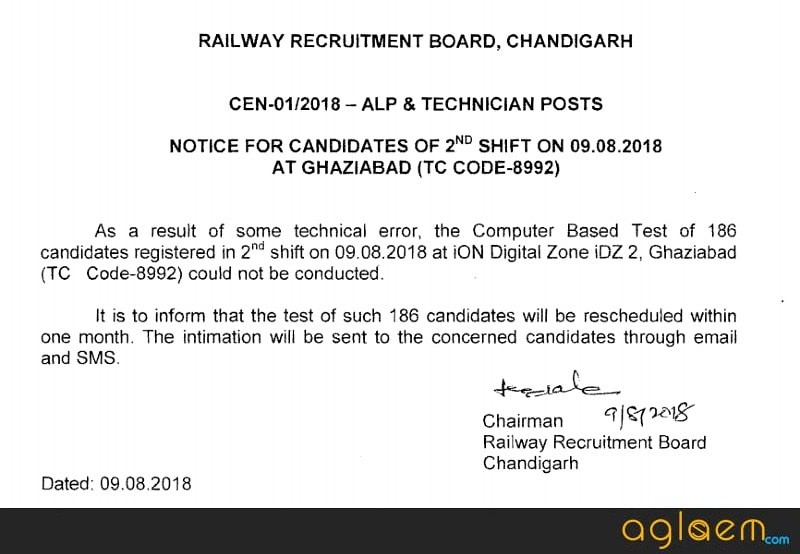 In rest of the centers, the RRB ALP examination was conducted smoothly. Railway minister, Piyush Mishra has tweeted and informed that for the 1st shift of RRB ALP Recruitment 2018, 73.8% candidates have appeared. This is a successful number and states the zeal of youth towards railway jobs. 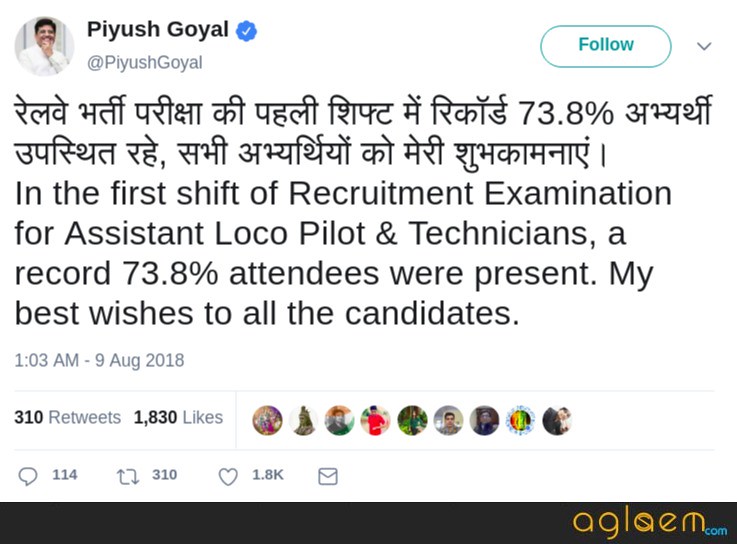 As per the review of the candidates, the RRB ALP examination was moderate in level of difficulty. Questions in the exam were asked in random order. Candidates were given 60 minutes to attempt all the question. The number of questions in exam was 75 and these were all of multiple choice type. The questions were asked from Maths, Science, GK, and Logical Reasoning.

All the best to all the candidates who appeared or will be appearing for RRB ALP CBT. We hope you qualify the exam with flying colours. You can ask us your doubts by commenting below.

MCI Will Launch New MBBS Syllabus Next Month; New Syllabus To Be Effective From 2019 Session

MHRD To Reconsider The Decision On NEET Conduct; NEET 2019 To Continue In Pen And Paper Mode Only

MHRD To Reconsider The Decision On NEET Conduct; NEET 2019 To Continue In Pen And Paper Mode Only