This is being called the World’s Largest Recruitment. Yes, Indian Railways is ready to carry out the recruitment exercise for about 25 million people who have applied for 90,000 vacancies. This is the largest ever recruitment process that the world has witnessed till date. RRB is recruiting for 26,500 positions (Automotive Loco Pilot) and 62,907 positions (Group D). This number is overwrought, both for the applicants and the employer.

With this, Indian Railways has also gained the status of the largest recruiter in India. Let us have a look at these big recruitment numbers, before discussing the reason of such overwhelming recruitment drive. 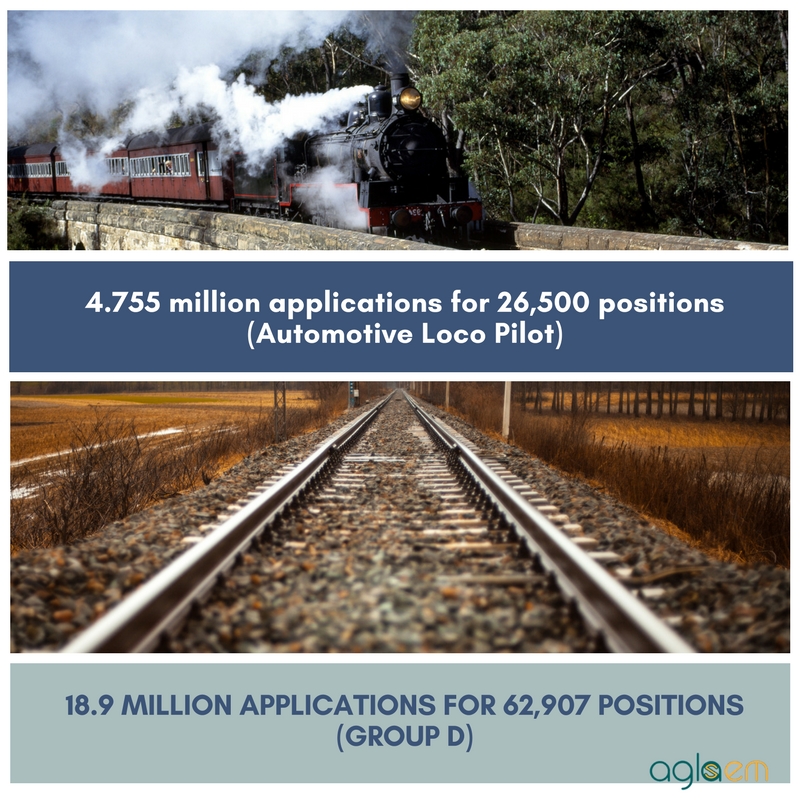 Why is this huge splurge of applications received?

Well, studying reasons behind this, it was found that at entry level public-sector jobs are more in number than those in the private sector, promise better salaries and perks, and often come with long-term income security. A job in the railways is particularly more sought after. “It’s the first choice for people who don’t come from well-off families. They want government jobs as soon as possible. And as for railway jobs, a majority of the work demands only class 10 pass qualifications, especially in Group D -drivers, carpenters, technician.

Also, another reason is that not everyone who applies for a railway job intends to land one. “Many people apply without any intention of taking the qualifying exam,” says Amitabh Khare, executive director of the Railway Recruitment Board. He adds, “Tickets to travel by train to the allocated examination centre are free for people who apply under reserved categories, so many people use this opportunity to see new places…”He also says: “Of the 30.3 million people who started the application process, only 23 million completed it.”

Now the tedious process of sorting these 25 million applications. Many applicants carry misleading photographs. So, how is this sorting done?

This huge recruitment drive is going to be time-consuming. A lot of sorting level is implemented to distinguish the fake and real applicants. To ensure quality software help and manual help are being used.

Mr Khare explained the process by saying that the first level of sorting is done by a computer programme. Here the applications carrying photographs of animals or building are trashed out. But a software can’t do much more than that in distinguishing actual candidates from fake candidates. Thus the second level of sorting is done manually. It’s a time-consuming process.

The Recruitment Process: So, the process will start with an online written examination for the candidates sorted by the authority, who the railways can trust to have applied in good faith. The question paper for the examination is framed in English, translated in 15 Indian languages, and sent directly to the applicants’ computer screens.

Nowadays with many new techniques to cheat and forge, it is a challenge for the railways to avoid such conditions at the test centres. Given that millions of candidates are going to appear at these centres, it is a head-scratcher for the Railways now. Regarding this Chairman of the Indian Railway Board Ashwani Lohani said that “Now we inform the candidates about the city 10-15 days in advance and of the centre two days before the exam.”

There is a budget of Rs 300 crore for this recruitment drive. The exams are divided into three stages. The number of students shortlisted for the second stage is usually fifteen times the number of openings. Those who clear the second stage are put through a “psychological assessment” that tests their preparedness for specific jobs built around trains that require “alertness” or “depth perception.”

After all that the list of the final selected candidates is made. Which is again a long process. “We have to enter quotas under various categories: SCs, STs, OBC creamy layer, OBC non-creamy layer, ex-servicemen, physically challenged. There are internal calibrations to be made within each category. There are positions open to orthopedically impaired candidates from which the blind candidates will have to be excluded and vice versa,” said Khare.

Well, bigger the recruitment, larger the scope of problems and more is the time required to cope up with them. Being such a huge event for the Indian Railways, anticipation is obviously high.

What do you think about the world’s largest recruitment drive? What are you expecting? Do let us know your views in the comment box below.