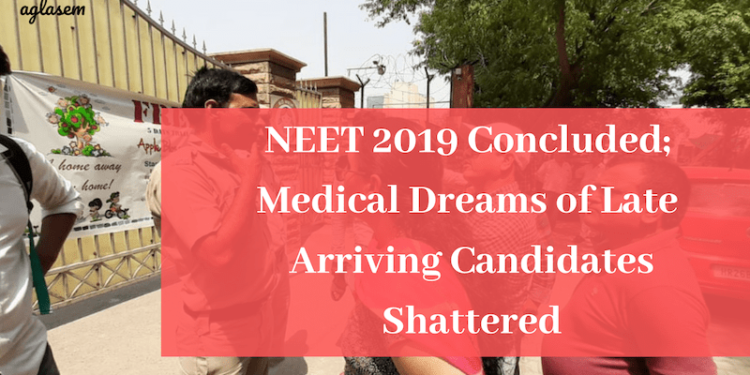 Around 4 PM, Chief Minister of Karnataka had tweeted an unfortunate event of some candidates missing out on their opportunity to appear for the exam today. Due to a 7 hour delay in the arrival of Hampi Express, these candidates had reportedly missed their NEET exam from various North Karnataka districts. This chaos arose due to change in the exam centre, the very last minute and improper communication of the same.

Late By Two Minutes, A Candidate Wasn’t Allowed To Enter The Exam Hall

The exam was conducted by NTA in offline mode between 2 PM to 5 PM. All the candidates were advised by National Testing Agency to report before 12:00 noon at their respective centres. Further, a candidate was clearly notified about the gate closing time to be 1:30 pm. Still, one of the candidate was reported to reach the centre late by 2 minutes than the exact gate closing time. Parents and the gate keepers got involved in a verbal spat to decide whether or not, this candidate should be allowed to appear for the exam.

The candidate’s parent claimed that in an unfortunate event of vehicle broke down, this delay had occurred. Otherwise, they were to report at the centre, well on time. Other parents at the centre also spoke in favour of the candidate and constantly urged the guards to allow the student to enter the exam hall. But, the guards were even undeterred in their decision, as part of their duty demands! 15 minutes had passed and the chaos was still on, outside the exam centre.

So, police was called to make the decision. Similar situation was witnessed at one of the CAT 2019 centres, as well. And that CAT aspirant wasn’t allowed to enter the exam centre, even after requesting ample number of times. This was the reason, a candidate is always asked to go through the instructions mentioned on the admit card and make a note of it.

National Testing Agency (NTA) is conducting this national level medical exam, for the first time this year! Unlike, other exams that NTA has conducted till now, NEET was held in pen and paper based test mode. Candidate had to attempt 90 objective type questions each from PCB sections. This exam was previously conducted by the Central Board of Secondary Education (CBSE). The medium of the NEET question paper was anyone of the 11 regional languages (including English, Hindi and Urdu).

To know more about NEET 2019, Stay tuned with Aglasem News!