Home » Indian Railways To Conduct Computer Based Test For NTPC & Other Recruitment From Dec 15; 2.4 Crore Applications Against 1.40 Lakh Vacancies

Indian Railways To Conduct Computer Based Test For NTPC & Other Recruitment From Dec 15; 2.4 Crore Applications Against 1.40 Lakh Vacancies 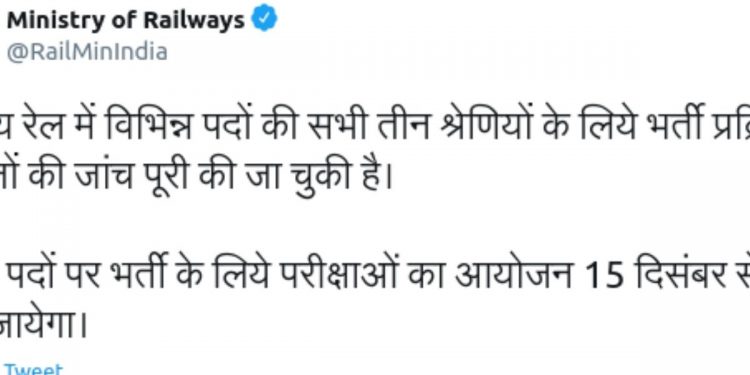 Indian Railways have made a big announcement earlier yesterday regarding the long-awaited RRB NTPC and other recruitment exams. According to official statements coming from top Railway authorities and notification posted on Press Information Bureau’s website pib.gov.in, the first stage computer-based tests are going to be conducted from December 15, 2020, onward. The examination is deemed to cover the initial selection test for RRB NTPC, Isolated and Ministerial category and Level 1 posts of the railways. As per the official statements, more than 1.40 lakh vacancies are available in these categories, against which, the Railways have received more than 2.40 crore applications.

In an official Twitter post from the Ministry of Railways’ account, Chairman of Indian Railways, Mr V.K. Yadav announced that the railways have been unable to conduct the selection tests due to the ongoing COVID-19 pandemic. The official statements came out on Saturday and is seemingly a big relief to candidates who have been protesting recently against such irregularities in conducting recruitment. The Chairman indicated that since examinations such as JEE for IITs and NEET are also being conducted by respective bodies now, the Railways has also considered starting their process of recruitment as per the schedule.

The complete schedule and SOPs related to the conduct of the recruitment selection tests are deemed to be announced soon. As of now, the Railways have already started the scrutiny of applications. Necessary SOPs to conduct recruitment tests amidst an ongoing pandemic are also being framed in the greater interest of public health and safety.

These vacancies were notified earlier as per schedule by respective Railway Recruitment Boards through their official websites. The application process for the respective recruitment was also started. Based on such events, Chairman Yadav in his official statements indicated that around 2.42 crore applications have been received for recruitment to these posts.

As per the official notice published by PIB Delhi, COVID-19 is the only reason that withheld the Railways from conducting the selection tests as per schedule. Incidentally, the last few weeks have witnessed widespread protest from applicants showing their displeasure over the silence maintained by the Railways as to when such tests could be conducted.