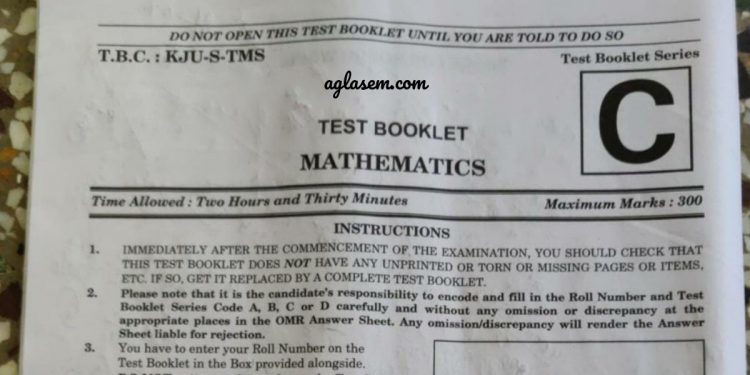 The Union Public Service Commission (UPSC) is conducting the common exam for NDA 1 and NDA 2 2020 admissions today. As per schedule, the Mathematics paper was held in the first shift from 10.00 AM to 12.30 PM. Memory-based questions and answer keys of NDA 2020 have already been publicized through online channels by those who appeared for the test in the first shift i.e. for the Mathematics paper. Coaching institutes and academic mentors are proposing solutions to the memory-based questions. Overall, an understanding of the Mathematics paper is gradually developing, as more and more questions are being updated.

As per academic mentors and coaching institutes, the paper on Mathematics was not very difficult. The fact seems to have taken the entire coaching and academic mentoring fraternity in the country by surprise as NDA Mathematics paper is known to be of moderate to the high difficulty level. Reportedly, topics such as Trigonometry, Calculus, and Matrices were predominant in the Mathematics paper that concluded in the first shift.

Trigonometry seems to have been one such area from which, the maximum number of questions were asked. However, a distinctive feature was that most of the questions based on Trigonometry were lengthy and required candidates to think out of the box to solve them. Matrices and Determinants and Calculus also formed a significant portion of the overall question paper. The topic of Limits was especially prevalent with a significant number of questions asked from this topic. The level of difficulty of the calculus-based questions is being considered to be easy as per various coaching institutes and similar experts.

As per such experts who have been engaged in coaching and mentoring candidates for the NDA 2020 exam, majority of the questions were repeated from the last 10 years of NDA exam. It has been a common phenomenon where the UPSC sets the question paper of NDA exam in such a way that questions are often repeated from previous years. However, this year, it seems that higher number of common questions have been repeated from previous years. It can be expected that those who referred to previous year question papers for preparations of today’s NDA exam had a competitive advantage over others.

Official answer keys of NDA 2020 exam will be uploaded by the Commission on the official website in due course of time. Till then, candidates can refer to such unofficial sources to get an idea of the number of correct answers they could mark in the exam. The analysis of the GAT paper will also be available with the conclusion of the exam today.

Indian Railways To Conduct Computer Based Test For NTPC & Other Recruitment From Dec 15; 2.4 Crore Applications Against 1.40 Lakh Vacancies