The University of Delhi or as it is popularly known as, DU, released a press release on May 29, 2019 in which the registration dates for UG, PG, MPhil, PhD has been released. As per the press release, the admission form for UG course is going to start tomorrow, i.e on May 30, 2019, whereas, for PG, MPhil and PhD courses is going to release on June 03, 2019.

The information brochure and the rest of the schedule for DU Admission 2019 will release with the activation of the link for registration. 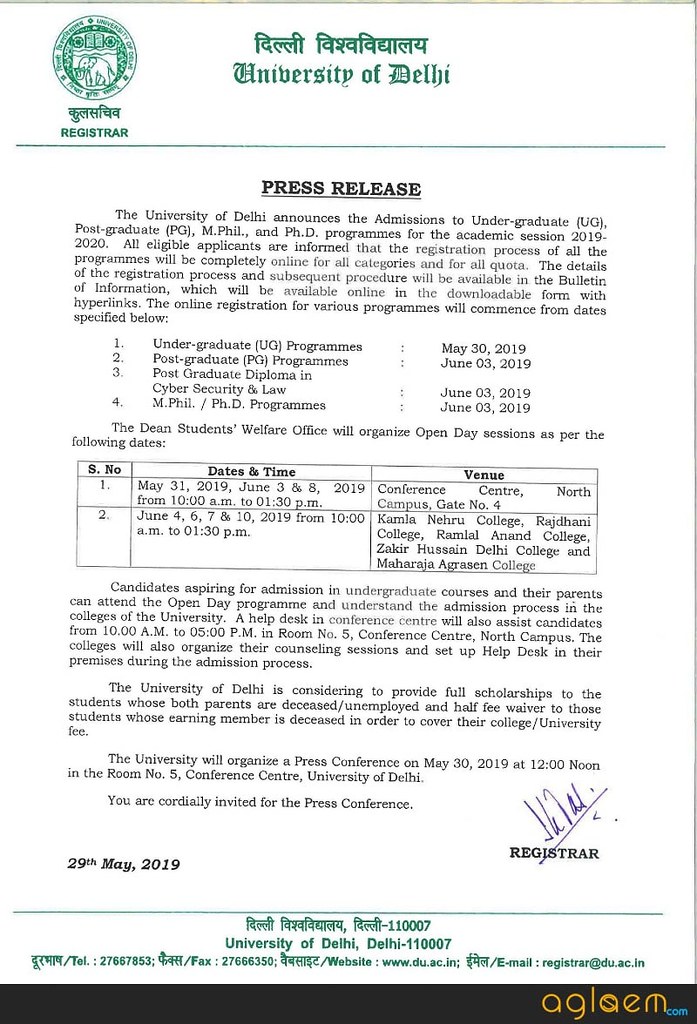 The open day is programme is open to the students and their parents. In the open day session, students can ask their queries and can understand admission process in the various Universities in DU.

Another important information provided in the press release is that DU is considering to provide full scholarships to the students whose both parents are deceased/ unemployed and half fee waiver to those students whose earning member is deceased in order to cover their College/ University fee.

Candidates are offered admission in UG courses are provided by two ways – Merit-based, and Entrance exam based. In the merit-based, the students are offered admission on the basis of marks obtained in Class 12th and then a cut off is released. Candidates who meet the cut off as released by DU, then submit the relevant fee and gets their document verified at the respective college.

For the entrance based admission, there have been some reports as per which, DU is in talks with NTA to conduct the entrance exam. However, there has been no such official announcement that NTA will conduct DU entrance exams.

DU is one of the most prestigious and popular college among the students. Generally, students after class 12th, look for taking admission in Delhi University.