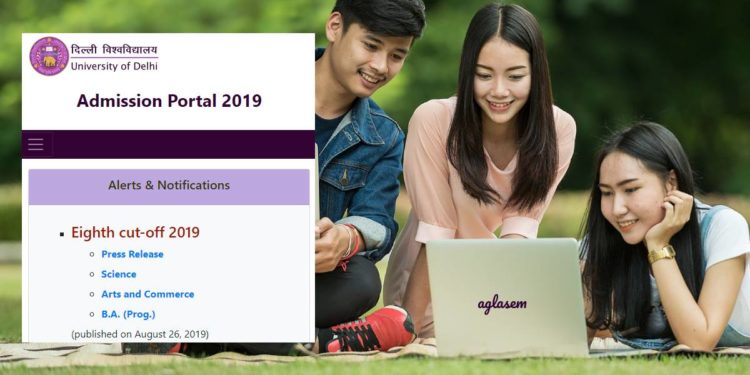 Delhi University has published the eighth cut off list for undergraduate merit based admission to academic session 2019-2020. DU 8th cut off list 2019 has been released at du.ac.in as three files, one each for science programmes, arts and commerce programmes, and BA program. A press release regarding the cut off.

The press release reads: “The Eighth Cut-Off list for admissions to various Undergraduate Courses (based on merit) of the University of Delhi for the Academic Year 2019-2020 will be notified / displayed by the different colleges of the University on Tuesday, the 27 th August, 2019. The details of the minimum cut-off percentage of marks (Eighth Admission List) at which admissions to various courses have been offered by different colleges are given in the enclosed charts. For details, with regard to variation in Cut-Off percentage, the candidates are advised to contact the respective colleges on Tuesday, the 27th August, 2019. As per scheduled already notified, the eligible candidates who meet the requirements notified in the Eighth Admission CutOff list are further advised to complete their admission formalities in the Colleges concerned within the stipulated time, as notified earlier on the University Website. (sic)”

Last year, University of Delhi had released ten cut off lists. The tenth list had come on August 25 in that year.

This time the eight cut off list has come in today. The previous list, seventh cut off, was released on August 5.

It was recently reported that a number of seats, majorly in reserved category, were vacant in colleges of the university. To fill the same, more cut offs are being released. Students who had applied for DU admission 2019, and had not got admission so far, can refer the eight cut off list and if they have the necessary percentage, then they should take the next steps towards completing the admission formalities.