Board of Secondary Education Odisha (BSEO) has canceled the Odisha Teacher Eligibility Test (OTET) 2018 after the question paper leakage. The question paper of OTET 2018 went viral on the social media platforms before the examination. In this addition, Board has ordered an investigation on the matter.

Photos of the question paper were circulated over the social media platform when the shift I paper of OTET 2018 undertaken. When the examination was over, most of the exam takers nodded that their paper was matched to the leaked paper.

The successive incidents forced to the BSE president to cancel the today’s exam. As per Jhan Ara Begum, the president of Board of Secondary Education Odisha, “We were forced to cancel the exam of both sitings on OTET, we have ordered the investigation to clear out the matter. Very soon the new examination dates will be intimated to the candidates”. After the declaration of re-exam dates, the admit card will be issued again. 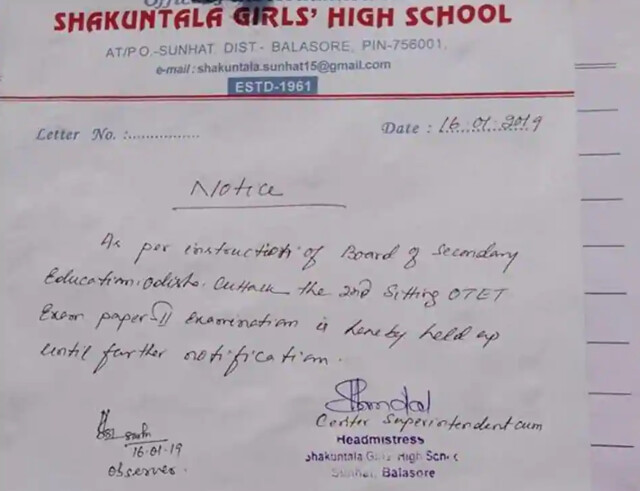 After cancellation, the aspirants of OTET 2018 showed their anger on social media platforms. Many students protested in front of the Uditnagar High School to show their anger in Rourkela. A total of 1.12 lakh candidates were appearing for OTET today. The Board selected 250 examination centers across the state.

Now all the aspirants have to appear for the examination as per the new dates of reexamination. The new dates will be released on the official website at bseodhisha.nic.in. The paper mode will be the same as the pen paper mode in two shifts. After the successful completion of the test, the result will be announced and qualified candidates will be issued the eligibility certificate.