It is anticipated that Indian Airforce Airmen Result 2018, conducted for intake 02/2019 will be announced in first week of October. Selection Test for Airmen Recruitment (STAR) phase 2 was held from September 13 to 16, 2018.

Last time the Airmen XY Group exam was held from May 3 to 6, 2018, and result was announced on May 21, 2018. Candidates who appeared in the more recently held exam have been looking forward to get the selection list within 15 days of exam as has been mentioned in the official notification too. 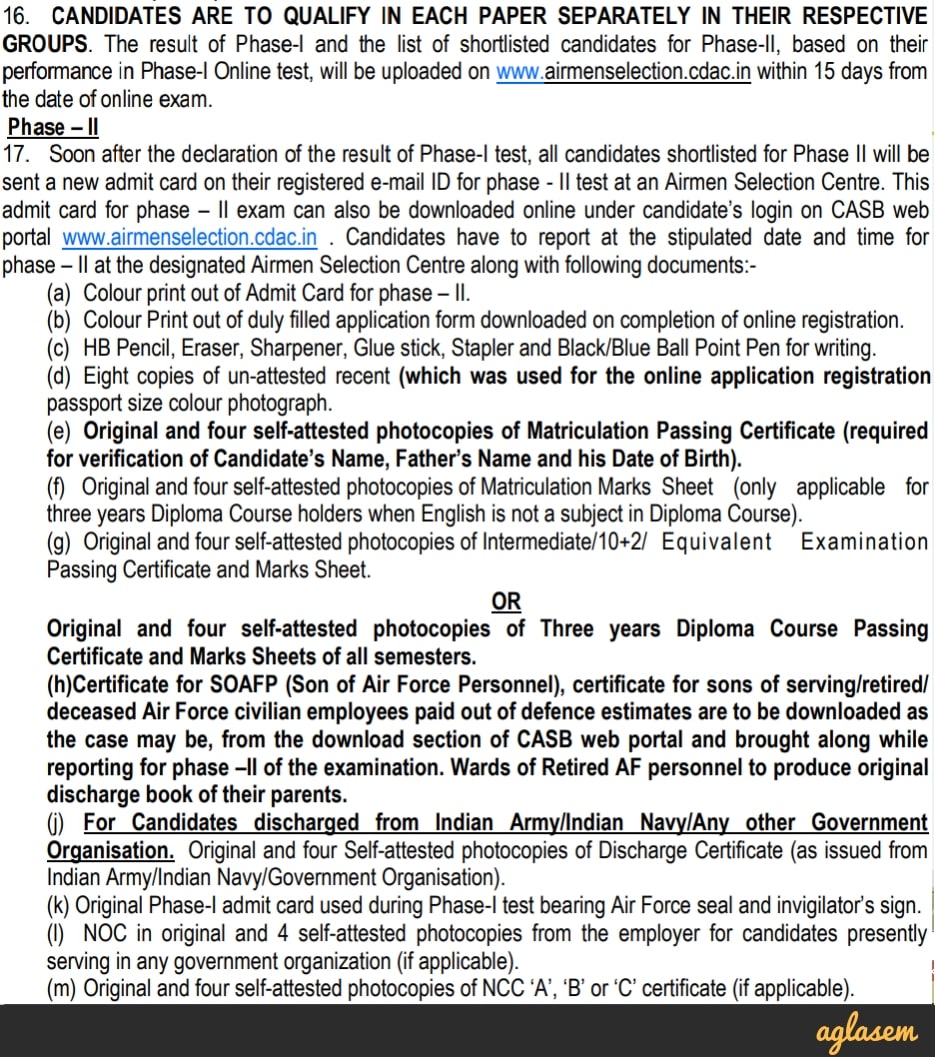 Once result is finalized, it will be put up at the official website airmenselection.cdac.in. there will be a PDF file containing list of candidates who are shortlisted for phase II testing. The list will have registration numbers and group in which candidate has qualified.

Those who get shortlisted for Phase II will be able to download their admit card from airmenselection.cdac.in. A printout of the same, along with other relevant documents need to be brought for phase II testing.

Indian Air Force has given the responsibility for conducting online tests to CDAC (Centre for Development of Advanced Computing). For Group X trades, there was a 60 minutes exam comprising of questions in English, Physics, Mathematics. For Group Y (Except Automobile Technician, GTI, IAF (P), IAF(S) and Musician), there was a 45 minutes exam with English, Reasoning and General Awareness questions.

Candidates who opted for XY groups appeared in a combined exam of 85 minutes duration with English, Physics, Mathematics, Reasoning and General Awareness.

After the exam concluded, reports emerged of hacking of online test. A centre in Rohtak, Haryana was where candidates were caught indulging in a cheating racket, though the complete extent of the racket is yet to be revealed.

A candidate was found to be idly sitting in front of the computer and yet typing in answers. This raised some eyebrows and it was found that a handful of test takers were sitting in room next to the exam hall with remote connectivity to computer network and feeding the candidates answers.

Those accused in the racket include an owner of a computer centre located in Gurgaon, a former ITI principal from Jhajjar, a coaching centre owner. They allegedly charged candidates Rs 5 to 6 lakh rupees to help them cheat in the IAF Airmen Selection exam.

Further reports will reveal to what extent this has, or has not damaged the selection process. However until now, there is no official notice on this case.

Shortlisted candidates need also pass Physical Fitness Test comprising of 1.6 Km run to be completed within 06 minutes 30 seconds. Candidates shall also have to complete 10 Push-ups, 10 Sit-ups and 20 Squats within the stipulated time. This will be followed by Adaptability Test.

Provisional Selection List (PSL) will be compiled once the selection test is over. It will be put up for public notice at Airmen Selection Centres (ASCs) and also on official website airmenselection.cdac.in on April 30, 2019. Being in the PSL shall be dependent upon the performance of candidate in exam and medical fitness. Enrolment is only on the basis of merit subject to medical fitness, availability of vacancies, not exceeding the age of 21 years on date of enrolment and meeting all the laid down eligibility criteria as and when called for enrolment. The validity of the PSL will be 06 months from the date of display and will be applicable only for intake/entry 02/2019.

Enrolment List will be published on June 10, 2019, which will be the final list of candidates who are to be enrolled as Airmen.