Home » University & Colleges » 6 Institutes Get Institute Of Eminence Status; Know About Them The Government of India has taken another initiative towards the ranking of Indian institutes globally. Regarding this, the Human Resource Minister, Mr Prakash Javedkar has announced the names of the six institutions which have been listed as the Institute Of Eminence (IoE).

The government proposed this plan in the year 2016. Some well known and reputed universities and institutions had applied for this scheme including the most popular IIT Institutes, and some state-level universities. According to the plan, the panel would have to choose 10 private and 10 public institutions. But after the analysis, the government came up with the names of 3 public and 3 private organizations. These firms include the name of Indian Institute of Technology (IIT) Bombay, IIT-Delhi and Indian Institute of Science (IISc) Bangalore in the public sector while Jio Institute by Reliance Foundation, BITS Pilani, Manipal Academy of Higher Education in the private sector.

However, HRD Minister had also tweeted about the scheme of IoE. He will grant the funding of Rs. 1000 crore to these publics organizations in the next 5 year. But the private institues will not be able to acquire any government funding. 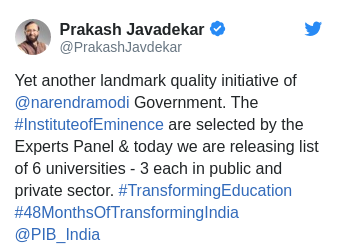 According to the minister, these organizations will be free from the approval of the University Grants Commission (UGC). The institutes are eligible to create their own curricula and syllabi.

These institutions will be granted to admit 30% foreign students. There will be no restrictions on the fee on them. The organizations will also be able to hire the foreign faculty (25% of the total faculty).

In 2018 National Institutional Ranking Framework, IISc got the first rank while IIT Bombay and IIT Delhi are at the third and fourth position respectively. BITS Pilani contains 26th rank. However, Reliance Jio Universtiy does not have any website or precise address in the google search.

Though, according to the PTI, on March 11, 2018, the Reliance Foundation was planning to initiate a university for cutting-edge research and innovation. So, the government shared a statement which says that this institute would be a great transformational impact on the ranking of the institutes all over the world.

For more updates, keep in touch with us. If you have any query then do ask it in the comment section given below.

CBSE Cancels UGC NET 2018 Exam In Allahabad; Board to Hold Re-exam in a Week