Home » University & Colleges » Jio Institute Gets Institute Of Eminence Status; 6 Things You should know about it The move of providing the status of Institute of Eminence (IoE) is a part of the scheme of Human Resource Development (HRD) Ministry. Under this scheme, 6 institutes are selected that will enjoy complete academic and administrative autonomy. Thus, Jio Institute has been selected as one of such institutes by the government. In addition to the autonomy, these institutes will also get Rs 1,000 crore each from HRD ministry to achieve the world-class status.

Apart from Jio Institute, five other educational institutions, that are IIT-Delhi, IIT-Bombay, Indian Indian Institute of Science (IISc), BITS-Pilani, Manipal Academy of Higher Education has received the status of IoE. However, the inclusion of Jio Institute in this list has received widespread criticism.

On Monday, i.e. July 09, 2018, Jio Institute was trending on Twitter. Many eminent journalist and educationalist have taken over Twitter to demand the answer to why Jio Institute was included as an IoE? This criticism was mainly raised as Jio Institute is not existing as of now. It is just in the proposed format by the Reliance Group. 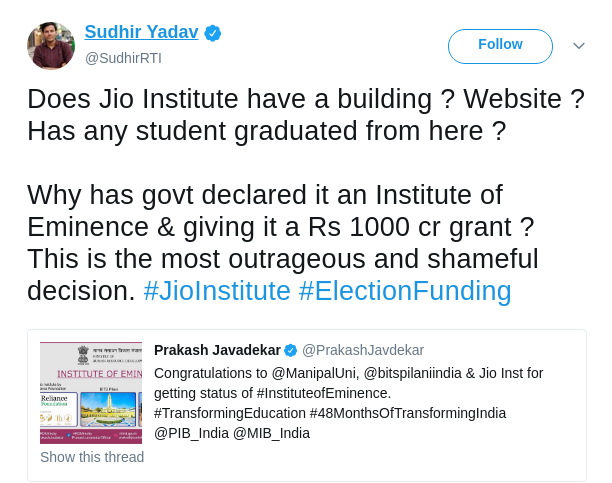 Clearing the hustle around this Ministry of HRD has tweeted later on with clarification. The tweet has been attached here:

In the defence, MHRD said that Jio Institute fits into greenfield category, which considers new or proposed institutions that are yet to come into existence. According to MHRD, there were 11 proposals received for greenfield category, but only Jio Institute clear the 4 parameters as issued by HRD. The 4 parameters are: land availability for constructions, putting in place a core team, making available funding for the setting of the institute, a strategic vision plan.

What are greenfield Institutions?

Those institutions which are built from the scratch on a vast area of land are called greenfield institutions.

Now that Jio Institute has been selected for being an IoE, it will receive the ‘Letter of Intent’ (LoI) for setting up an IoE.

Here are 6 things you would like to know about Reliance Foundation’s Jio Institute:

#1 Jio Institute is an institution proposed to be set up by Reliance Foundation, led by Nita Ambani.

#2 the Institution is proposed to be set up near Navi Mumbai, Maharashtra

#3 Reliance Foundation will now have to set up the Jio Institute and thus indicate its readiness for starting all academic operation within 3 years of issuance of LoI.

#4 Jio Institute does not have the IoE tag as of now. It is starting in the greenfield mode. It has just qualified for the LOI. Once the institute is ready in 3 years, it will have the IoE status.

#5 Now, that Jio Institute and other 5 institutes have received the status if IoE, they are expected to stand among the top 500 institutes of the world.

#6 The government will not fund the Jio Institute or any other IoEs from the private sector.