VBSPU Result 2019 announced at vbspu.ac.in; Colleges to do corrections by June 30 Veer Bahadur Singh Purvanchal University, Jaunpur has announced results for regular and private students. VBSPU Result 2019 has been published at official website vbspu.ac.in. They have been published for UG as well as PG courses. Students can check result by logging in with roll numbers.

Students need to visit vbspu.ac.in. There they must click first button in red color that says click here to view results of session 2018-19 annual courses. This leads to the page containing results of all programs. But before one can access results, a pop up containing some instructions from the university opens. Click here to check VBSPU Result 2019.

As per it, there are three reasons due to which result may have not been announced for one or more students. First is if university fee has not been deposited by college. Second is if college has not provided practical or viva voce scores. And third is if student is marked as unfair means. It also says that college must get all corrections done by June 30, 2019. Upon reading these instructions, candidates must click the cross button. 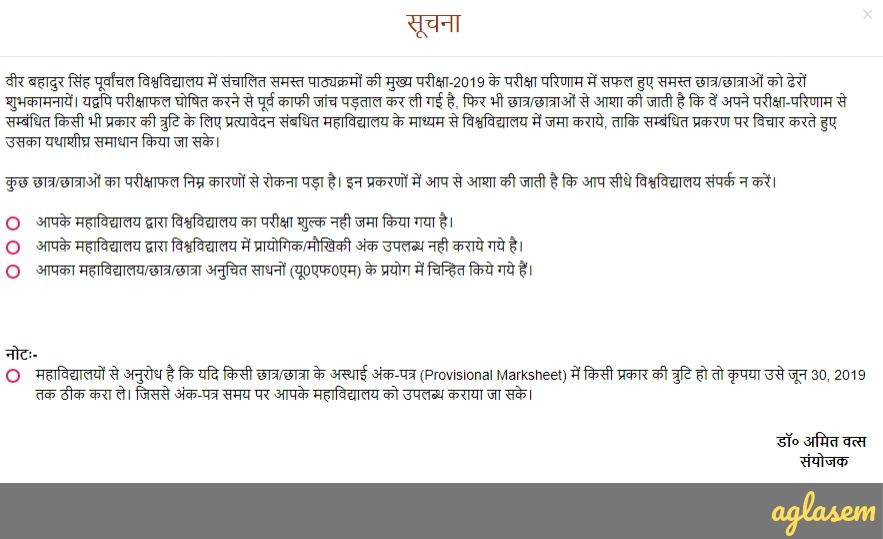 All results can be checked roll number wise. Separate PDF files containing merit or such details are not available. It is also relevant to note that at the time of publishing this news, BA first year and BA second year results links were not active.

After initial date sheet was released, changes were made to few exam dates in view of UP BEd Entrance Exam 2019 falling on April 15, 2019. Prior to exam, VBSPU had released district wise center list of exam. They were published separately fro Allahabad, Jaunpur, Ghaziabad, Azamgarh, Mau.

VBSPU was formerly known as Purvanchal University, Jaunpur. It was founded in 1987. Now it is named after Shri Vir Bahadur Singh, who was the former chief minister of Uttar Pradesh. Initially Purvanchal University had 68 affiliated colleges, whereas now VBSPU has 367 affiliated UG and PG colleges. Nearly 380000 students are enrolled from 5 districts of east UP. The varsity has a 171.5 acre campus at Shahganj Road, Siddiquepur, Jaunpur, Uttar Pradesh 222003. In order to get admission in VBSPU, interested students need to appear in PUCAT 2019 exam.