Ministry of Health and Family Welfare (MoHFW) has officially announced the establishment of three new All Indian Institute of Medical Sciences (AIIMS). The talks of increasing the number of AIIMS has been making rounds for some time now. Finally, the Ministry has now confirmed the news on January 24, 2018, through an official gazette.

The new AIIMS will be constructed in Andhra Pradesh, Maharashtra, and West Bengal. The official notification confirming the establishment of the institute-come-hospital is as below. 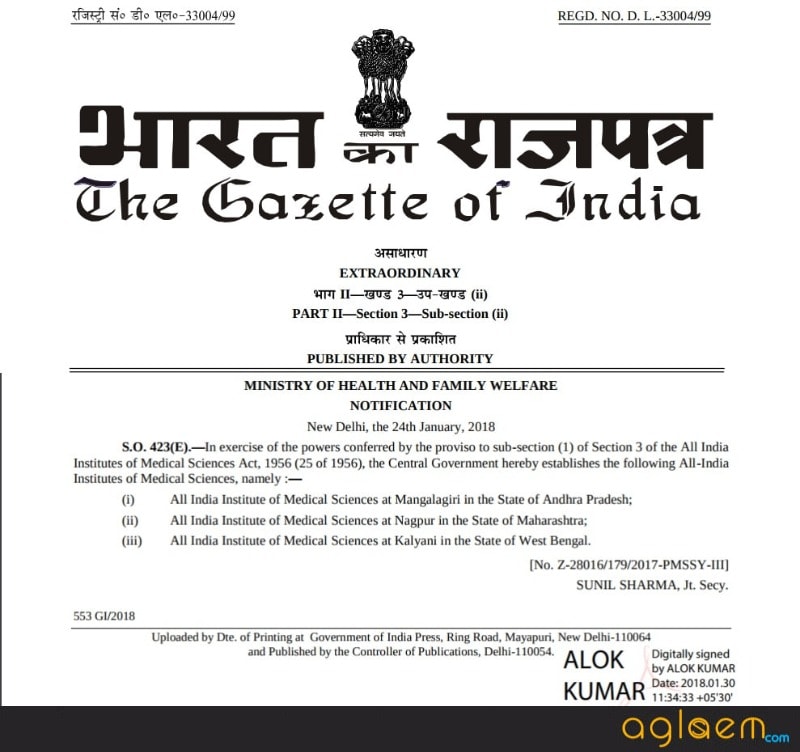 Currently, there are seven AIIMS in India. AIIMS New Delhi was the first one to be established in 1956. Then, as per the All Indian Institutes of Medical Sciences Bill 2012, AIIMS Bhopal, Bhubaneswar, Jodhpur, Patna, Raipur, and Rishikesh were inaugurated.

The plan to multiply the number of AIIMS has been in the process for a long time. It is a part of phase IV of AIIMS institutions. In 2014, Govt. announced twelve new AIIMS. As per the 2014 Budget, 4 of it were to be established in that year. The Institute was to be established in Mangalagiri, Nagpur, Gorakhpur, and Kalyani. Then, in the year 2015, six new AIIMS were planned to be set up in Mangalagiri, Nagpur, Gorakhpur, and Kalyani.

Then, in the Union Budget 2017, Union Finance Minister Arun Jaitley disclosed that two new AIIMS will be set up. The Minister also stated that the new AIIMS will be established in the state of Jharkhand and Gujarat. Jaitley also confirmed that the government aims to lessen the shortage of doctors and will try and increase the number of PG medical seats by 5000.

“The expansion of postgraduate medical education is a priority as the shortage of PG medical seats in the country affects not only the availability of specialist doctors but also the ease of getting faculty for medical colleges. A 100 seat medical college requires 58 faculty at the permission stage and 105 faculty at the recognition stage. The country has about 18,000 PG medical seats in clinical subjects. Assuming 100 new medical colleges are set up in the next 4-5 years, additional faculty members numbering six to ten thousand will be required,” – read a Statemnet by Union Health Ministry

Currently, there are nearly 1800 PG seats in India but we fail to match 1 doctor for every 1000 people standard by World Health Organization.  The doctor-population ratio is stagnant at 1:2000 and by 2021 the government plans to achieve it. Approximately 100 new medical institutes are expected to be constructed within next 4 to 5 years and commencement is being done with AIIMS.

Many announcements and promises were made but this is the first official notification confirming the establishment. AIIMS is one of the most acclaimed medical institute and hospital. It offers, medical admission in both UG and PG courses. Establishment of new AIIMS is a good news for the entire country.

It is expected that the Government will soon make an announcement for setting up of more medical institutes. What is your take on the matter? Will establishing more institutes will solve the problem of less doctors in India? Let us know in the comment section below.