Staff Selection Commission has confirmed that SSC JHT Result 2018 will be announced on May 31, 2018. Said date has been published in “Status Report as on 17.4.2018 of Results to be declared by the Commission.” in the There was some news that the result might be released earlier but according to the reliable sources, it is expected that it will be released on May 31.

The result will be announced on the official website ssc.nic.in. In order to check the result, the candidates will have to first visit the official website. Then click on the tab named as “Result”. After that, a list of teh different notifications will appear to you. Hit the link to check SSC JHT Result 2018. Now, the result will be available to you in the pdf format. The candidates are advised to check the result and take the printout of it for the future reference. 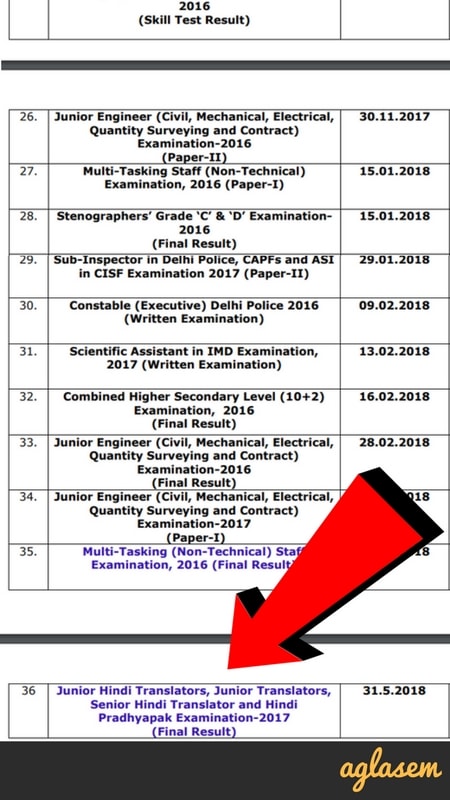 The candidates who will be shortlisted for the appointment will be placed in the result by Staff Selection Commission. The SSC JHT Result 2018 will contain the record, roll number, name, cat1, cat2, cat3, catsel, post, department, and the rank of the candidate. It will be available in the increasing order of the Roll Numbers.

In 2016, the candidates who topped the SSC JHT Exam was Yadav Jagdish Chandra Muniraj. He got 1st rank last year.

Staff Selection Commission conducts various exams every year for the recruitment of the departmental organizations. The most popular exams which SSC conducts is Combined Graduate Level Exam (CGL) and Combined Higher Secondary Level (CHSL) Exam. Every year, lakhs of the candidates appear in the SSC level exams. The candidates who qualify the exams are used to be appointed for the National level, State level and for other organizations.

DU Admission 2018 To Start In Fourth Week Of April; First Cut Off In June